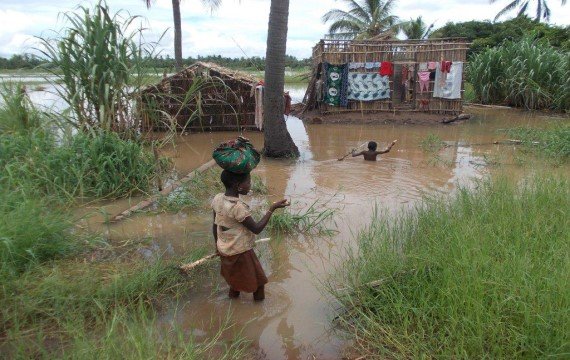 Mozambique 2015 floods. Although their contribution to climate change is negligible, Small Island Developing States and Least Developed Countries, such as Mozambique, are very vulnerable to climate impacts and have limited means to adapt to future climate change and recover from impacts already occurring, often with devastating effects on economic development. Photo credit: Africa Trade Magazine

Warsaw International Mechanism for Loss and Damage associated with Climate Change Impacts (WIM)
The official page of the UNFCCC’s body designated to deal with Loss and Damage, where you can find background materials, decisions, conclusions and documents, reports of meetings of the WIM Executive Committee, and information about events.

Explainer: Dealing with the “loss and damage” caused by climate change
This Carbon Brief article provides a comprehensive overview of the key terms of loss and damage negotiations.

Recent reports & stories in the media

Who will pay for the damage caused by climate change?, BBC Future, 14 December 2021

Loss and damage: Who pays for the impacts of the heated Earth?, Climate Home, 3 December 2019

Storms in America and the Pacific are evidence of climate change, The Economist, 20 September 2018

The Unequal Burden of Climate Change, Emily Atkin in The New Republic, 18 September 2018

Not a silver bullet. Why the focus on insurance to address loss and damage is a distraction from real solutions., report by Heinrich Boell Foundation, 30 August 2018

When will the world’s polluters start paying for the mess they made?, Climate Home, 2 May 2018

What it’s like to run a country that could be destroyed by climate change 13 February 2018, Vox
The prime minister of Antigua and Barbuda on the lessons of Hurricane Irma.

Loss and Damage under the UNFCCC process

The history of L&D in the context of climate negotiations dates back to 1991 when the Alliance of Small Island States called for a mechanism that would compensate countries affected by sea level rise. Over time, more and more vulnerable countries realized that they too are affected by climate change that is beyond their coping capacities. The idea of a mechanism that would help them in addressing loss and damage gained wider support. The concept of loss and damage made it into a decision coming out of a COP when in 2010 the so-called loss and damage work programme was initiated at COP16, which finally lead to the establishment at COP19 in 2013 of a body to deal specifically with issues relating to loss and damage: the Warsaw International Mechanism on Loss and Damage (or WIM for short). With the inclusion of Article 8 of the Paris Agreement, loss and damage has now become firmly installed as a thematic pillar under the United Nations Framework Convention on Climate Change (UNFCCC). For an excellent overview of the process and dynamics of leading to the establishment of the WIM see Vanhala & Hestbaek and Calliari.

For an in-depth insight into how loss and damage emerged in the context of the UNFCCC and for a thorough assessment of the implications of the Paris Agreement for loss and damage see the in-depth analysis by Mace & Verheyen.

09 December 2021
Facing the facts – the need for loss and damage finance can no longer be denied, Olivia Serdeczny, Adao Soares Barbosa, Hafij Khan, Sneha Pandey, Doreen Stabinsky
For years, developing countries have been calling for financial support in their efforts to address loss and damage – the unavoidable impacts of climate change that countries cannot adapt to. By the end of COP26, it became clear that the elephant in the room – failure on the part of developed countries to systematically provide L&D finance – can and will no longer be ignored.

20 December 2019
Loss and Damage at COP25 – a hard fought step in the right direction, Dawn Pierre-Nathoniel, Linda Siegele, Inga Menke
The Review of the Warsaw International Mechanism for Loss and Damage (WIM), undertaken at COP25, was an opportunity for a stronger commitment for action and support, including new and additional finance, capacity building and technical support. Long intense negotiations and a united position among developing countries of G77 and China, lead to an acceptable outcome.

17 December 2018
Progress on Loss and Damage in Katowice, Olivia Serdeczny, Dawn Pierre-Nathoniel, Linda Siegele
Developing countries were calling for the inclusion of Loss and Damage in the transparency framework and the Global Stocktake. We can now say: they succeeded. Under the newly adopted guidelines for implementing the Paris Agreement, vulnerable countries will have a place to report climate-related losses, what they are doing to deal with them, which could well include the information on the help they need. What is more, assessing information on loss and damage will be part of the five-yearly exercise of evaluating the progress towards implementing the Paris Agreement.

14 September 2018
Loss and damage in the Paris Agreement rule book – state of play, Olivia Serdeczny
At the start of September, delegates from all countries met in Bangkok to progress work on developing the guidelines for implementing the Paris Agreement, that is mandated to conclude by the end of this year at COP24 in Katowice. Building on consistent calls at negotiation sessions since Paris in December 2015, many developing countries argued that loss and damage (L&D) should be systematically considered in this context. This blog entry provides a snapshot of recent negotiations and their outcomes.

18 July 2018
Climate change loss & damage – an urgent, cross-cutting issue, Amanda Colombo, Frances Fuller, Laetitia De Marez
From unprecedented super charged tropical storms to record-breaking temperatures and ever more grim predictions of sea level rise, scientific evidence of current climatic events points to a new norm. These climatic events are rapidly pushing Small Island Developing States (SIDS) to the verge of their coping capacities, beyond which they will experience irreparable loss and damage. The Government of Belize hosted an event at the Office of the Commonwealth at the United Nations in New York to take a pragmatic look at the question: How can we increase understanding and international cooperation to address this urgent issue?

2 May 2018
How to ensure solutions really work – key questions for the Suva Expert Dialogue on Loss and Damage, Olivia Serdeczny, Inga Menke, Adelle Thomas
As experts gather at the Suva Expert Dialogue 2-3 May in Bonn, ministers and ambassadors from vulnerable countries renewed their call for support to cope with climate-related loss and damage. As discussions on possible solutions to loss and damage in developing countries progress over the next two days, it is worthwhile to highlight key questions that must be taken into account: responsibility, feasibility and affordability.

11 April 2018
The Suva Expert Dialogue: pushing the conversation on Loss and Damage, Olivia Serdeczny, Linda Siegele, Doreen Stabinsky
The Suva Expert Dialogue 2-3 May in Bonn, and the technical paper it is meant to inform, are important next steps to furthering collective understanding of approaches to address loss and damage, associated finance needs, and sources of support. Here’s what to expect from the two-two day meeting.

20 November 2017
Loss and Damage at COP23 – goals, roadblocks and detours, Olivia Serdeczny
COP23 was hosted by a small island state, Fiji, and vulnerable countries thought it was high time to address the issue of Loss and Damage head on. The result from the first ‘islands COP’ is that it is obvious we are not driving in the fast lane however the goals are not out of sight either. This blog analyses the outcomes of COP23 on the issue of Loss and Damage and identifies next steps to move it forward.

23 August 2017
Island states need better data to manage climate losses, Dr Adelle Thomas
Loss and damage – an emerging issue in climate negotiations – is not just a future threat to highly vulnerable small island developing states (SIDS): it is happening now. This blog describes the existing methods that SIDS are using to assess and manage loss and damage, as outlined in a recent study, which featured interviews with negotiators from the Alliance of Small Island States (AOSIS) and analysed the intended nationally determined contributions (INDCs) of AOSIS member countries.

Loss and Damage and the IPCC

Given that loss and damage has only recently been incorporated into the UNFCCC’s work, the concept was not sufficiently well developed for incorporation into the IPCC’s fifth assessment reports (AR5). The term was only used 30 times in the whole of IPCC WGII AR5, and was not listed in the 30-page glossary (Van Der Geest & Warner, 2015). However, since 2013 an extensive information base on loss and damage has developed, with over 100 peer-reviewed publications available and likely many more forthcoming.

A COP22 decision in 2016 asked the Executive Committee of the WIM to “ensure that the best available science is highlighted” in the WIM’s work (UNFCCC, 2016). The need for scientific information on loss and damage was thus explicitly voiced by governments and collectively supported at COP22. As the scientific arm of the UNFCCC, the IPCC is the right body to provide the best available science as guidance for work under the UNFCCC, and therefore the IPCC’s upcoming reports need to consolidate the available scientific literature on loss and damage and its related concepts. Without such scientific information, policy makers will be poorly equipped to adequately address the issue and to fulfil the mandate of the WIM.

27 November 2019
Towards a solid science base: Loss and Damage in the IPCC Special Reports on Land and Oceans and the Cryosphere by Emily Theokritoff, Claire Fyson, Adelle Thomas, Olivia Serdeczny, Carl-Friedrich Schleussner
This briefing which looks at how issues relevant for loss and damage, and particularly important to Small Island Developing States and Least Developed Countries, have increased in prominence in the recent IPCC Special Reports. The reports agree that attributable climate change impacts are evident at today’s levels of warming. Even some extreme events, such as marine heat waves, are almost completely attributable to climate change, providing a solid underpinning for the loss and damage discourse.

16 May 2017
“It’s complicated” – loss and damage in the IPCC Sixth Assessment Report, Olivia Serdeczny
This blog examines how the draft outline of the IPCC Sixth Assessment Report doesn’t contain an explicit reference to loss and damage but will deal with “residual risks”, “adaptation limits” and “attribution.” Should this outline be adopted at the next IPCC plenary, it would be a missed opportunity to bring the entire spectrum of loss and damage available in the scientific literature into focus and support vulnerable countries in preparing do deal with it.

7 May 2017
IPCC special reports on land, oceans and ice, Claire Fyson
In addition to the sixth assessment report and the special report on 1.5°C, the IPCC has two other special reports in the works: one on how climate change impacts land and another on oceans and cryosphere. Both are of great importance to vulnerable countries, like small islands. Although there will not be an explicit reference to the issue of loss and damage, thanks to a strong push by vulnerable countries both outlines now incorporate some of its core components, like climate change attribution, residual risk and adaptation limits.

Management of loss and damage in small island developing states: Implications for a 1.5°C or warmer world Thomas, A. and Benjamin, L.Regional Environmental Change (2017)
This paper explores existing methods that SIDS are using to assess and manage loss and damage. Authors interviewed negotiators from the Alliance of Small Island States (AOSIS) and analysed the intended nationally determined contributions (INDCs) of AOSIS member countries.

Non-economic losses from climate change: opportunities for policy-oriented research, Olivia Maria Serdeczny, Steffen Bauer & Saleemul Huq, Climate and Development (2017)
This article identifies the opportunities for engagement on the topic of non-economic losses from climate change under the existing mechanisms under the UNFCCC.

Loss and damage under the UNFCCC – what relationship to the Hyogo Framework
The Hyogo Framework is a global blueprint for disaster risk reduction efforts during the next decade. Its goal is to substantially reduce disaster losses by 2015 – in lives, and in the social, economic, and environmental assets of communities and countries. This background paper outlines the key characteristics of loss and damage associated with climate change and explains the risks of addressing loss and damage under the umbrella of Disaster Risk Reduction.