What is the Paris Agreement Long-Term Temperature Goal?

The Long-Term Temperature Goal of the Paris Agreement is one goal, establishing 1.5°C global mean temperature rise above pre-industrial levels as the long-term warming limit, which caters for two interpretations:

In the latter case, the Long-Term Temperature Goal requires the continuous pursuit of efforts towards 1.5°C, whilst holding warming well below 2°C. This means unambiguously that peak warming must be “well below 2°C” and that there is an obligation to reduce global mean temperatures below 1.5°C in the case of a temporary overshoot.

The Paris Agreement’s Long-Term Temperature Goal is an operationalisation of the ultimate objective of the UNFCCC, which is to prevent dangerous anthropogenic interference with the climate system. It is meant to enhance “the implementation of the Convention, including its objective”, which is important and relevant to understanding its meaning in practical terms.

Achieving the Paris Agreement goals would mean that temperatures decline again after peak 21st century levels. These declining temperatures are essential for reducing the long-term impacts of climate change such as ocean acidification (via reducing CO2 concentrations), sea level rise, as well as reducing the risk of triggering tipping points of the earth system. Ocean acidification is an important and potentially dangerous interference with the climate system.

How to interpret “holding warming to well below 2°C”?

“Holding warming to well below 2°C” means that emissions pathways cannot return warming to well below 2°C by 2100 or any other time, but must instead hold warming well below this level throughout the 21st century, if not indefinitely. This means that peak 21st century warming has to be held “well below” 2°C to meet the Paris Agreement’s temperature goal – thereby establishing a clear constraint on any temperature overshoot above the 1.5°C level.

The use of “well below 2°C” in the Paris Agreement is a significant strengthening of previous “below 2°C” language, adopted at the 2010 climate summit in Cancun. In the IPCC AR5, and the wider scientific literature that fed into it, the “below 2°C” Cancun language was identified as having only a 66% probability of staying below 2°C (this translates as “likely” in IPCC terminology).

In 2013-15, the UNFCCC conducted its first Periodic Review of the ‘hold below 2°C’ goal. It established that warming of 2°C “could not be considered safe”, and provided justification for revising the temperature goal. This led to the Paris Agreement’s adoption of the 1.5°C warming limit, with a provision to always “hold” warming “well below 2°C”.

Close reading of the pathway classification in the latest IPCC AR6 Working Group III report shows that the IPCC is taking pains to add further clarity around what “hold well below” 2°C means.

In the AR6 SPM, the IPCC stipulates that 1.5°C compatible pathways in the C1 category – are characterised by a more than 50% chance of limiting warming to 1.5°C and a less than 67% likelihood of reaching or exceeding 1.5°C. But then, in a footnote, it adds that 1.5°C pathways in this category also have a “simultaneous likelihood to limit peak global warming to 2°C throughout the 21st century of close to and more than 90%”. 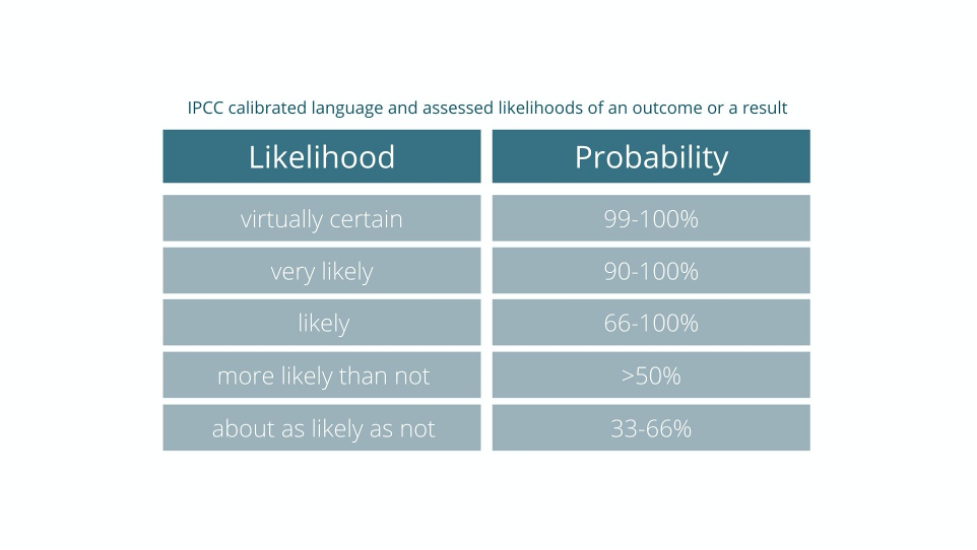 So, decoding the IPCC language tell us 1.5°C pathways are “very likely” to hold warming below 2°C.

The IPCC is also making it clear that it’s not a case of either achieving the 1.5°C limit or holding warming well below 2°C – they are part and parcel of the same goal and Paris Agreement compatible pathways should meet both elements.

Therefore, holding warming to “well below 2°C” is best understood as taking action to reduce emissions in line with pathways that have a 90% or higher chance of limiting warming to 2°C, (“very likely” in IPCC terminology), and that have a 33-66% chance (or are “as likely as not”) to limit warming to 1.5°C.

How does the Temperature Goal relate to the Mitigation Goal?

The elements of the Mitigation Goal are to peak emissions as soon as possible, rapidly reduce thereafter and achieve net zero greenhouse gas emissions in the second half of the century. The timing and rate of reductions are to be achieved based on the best available science consistent with meeting the Long-Term Temperature Goal. This needs to be assessed using Global Warming Potential 100 (GWP100), the required metric for emission reporting under the Paris Agreement and UNFCCC.

While all pathways in the ‘below 1.5°C’ and ‘1.5°C low overshoot’ categories of the Special Report on 1.5°C and category C1 of the AR6 report reach net zero CO2 emissions by mid-century, some do not achieve net zero greenhouse gas emissions in the second half of the century.

Limiting warming to 1.5°C implies reaching net zero CO2 emissions globally around 2050 with deep reductions in emissions of non-CO2 greenhouse gases, particularly methane. Achieving net zero for all greenhouse gas emissions, as set out in Article 4.1 of the Paris Agreement, will need to happen in the second half of the 21st century. This requires net negative CO2 emissions, or CO2 removal to compensate for emissions of non-CO2 gases considered difficult to fully eliminate, such as methane from farming activities.

These timings are linked to meeting the Long-Term Temperature Goal in accordance with the best available science.

A long-term temperature decline would follow from sustained net zero greenhouse gas emissions, in line with pursuing efforts to limit warming to 1.5°C in case of a temperature overshoot. Such a temperature decline from peak 21st century levels is essential to reducing the long-term impacts of climate change such as ocean acidification (via reducing CO2 concentrations), sea level rise as well as reducing the risk of triggering tipping points of the earth system.

What science has informed the adoption of the Paris Agreement goals?

The IPCC AR5 provided the ‘best available science’ at the time of the Paris Agreement and informed the assessment of climate impacts at different temperature levels that underlies the Temperature Goal.

The Temperature Goal is also explicitly linked to assessments of the risks and impacts of climate change undertaken by the UNFCCC’s 2013-2015 Periodic Review, which looked at the adequacy of the previous long-term goal of holding warming below 2°C. The Review concluded that the “guardrail” concept, where up to 2°C of warming was considered safe, was inadequate and should rather be seen as an upper limit – a line that needs to be stringently defended – and that efforts should be made to “push the defense line as low as possible,” noting that a warming limit of 1.5 °C would come closer to a “safer guardrail.”

Based on their assessment of the science as reflected in the Periodic Review, governments decided in Paris, 2015, that the long-term goal of the UNFCCC should be strengthened (see decision 10/CP.21). The impact assessment underlying the adoption of the Temperature Goal is therefore well-linked to the “best available science” at the time, i.e. as reflected in the IPCC AR5, and metrics and approaches used.

How do the revised estimates of historical warming in the AR6 report affect the Temperature Goal?

The IPCC Fifth Assessment Report (AR5) assessment used observed estimates based on the HadCRUT4 dataset for the historic warming that was assessed as 0.6°C between the 1850-1900 and 1986-2005 periods. Future impacts of climate change were assessed relative to the 1986-2005 reference period.

However, since the AR5, the scientific community has revised the historic warming estimate since 1850-1900. The IPCC AR6 clarifies in its Summary for Policymakers of the 2021 Working Group I report: “Since AR5, methodological advances and new datasets have provided a more complete spatial representation of changes in surface temperature, including in the Arctic. These and other improvements have additionally increased the estimate of global surface temperature change by approximately 0.1°C, but this increase does not represent additional physical warming since the AR5.”

This change, which only reflects improved ways of measuring warming rather than actual physical changes, and how it relates to the Paris Agreement goal is a question of value judgements and political guidance. The UNFCCC Periodic Review of the Long-Term Temperature Goal, now in its second phase (2020-2022) provides for an opportunity to assess the AR6 findings and its implication for the goal.

Which greenhouse gases metric should be used to account under the Paris Agreement?

For many years, the equivalence between CO2 and non-CO2 emissions in the UNFCCC has been calculated based on the Global Warming Potentials of each greenhouse gas over a period of 100 years – called GWP100 (read more about greenhouse gas metrics in Schleussner et al. 2019.). This allows each volume of emissions to be quantified in terms of CO2e (CO2 equivalent), so that the balance between emissions and removals required to achieve net zero could be calculated. The Paris Agreement rulebook agreed upon in Katowice established GWP100 as the metric for reporting under the Paris Agreement.

Some gases, such as methane (CH4), have a short atmospheric lifetime and a strong near-term warming effect. When their remaining emissions are compensated by removals of CO2 (a less strong but long-lived greenhouse gas) and a balance is achieved, continuing CO2 removals will lead to a decline in temperature. Such a temperature decline is fully consistent with the continuation of “pursuing efforts” to limit warming to 1.5°C under an overshoot interpretation.

Learn more about the 1.5°C temperature goal with links to our latest reports, science and webtools.

We address some commonly asked questions about whether the 1.5°C temperature goal is still feasible

This tool shows how the severity of climate change impacts will increase over time in continents, countries and provinces at different levels of warming, starting with 1.5°C, the limit in the Paris Agreement. It also allows access to the underlying data.