A new paper argues that the Paris Agreement 1.5°C temperature limit could be exceeded “before 2029,” but this conclusion is problematic.

The analysis, by Henley & King in Geophysical Research Letters, only shows that we will very likely exceed 1.5°C by that time if there is little or no action taken to reduce emissions. By using the highest IPCC emissions scenario their analysis is not designed to provide an estimate of the exceedance time of the 1.5°C temperature limit under climate action consistent with Paris Agreement implementation, nor under current policies globally.

It is well understood that rapid improvements in policy and near-term mitigation action are required to hold warming well below 2°C and limit warming to 1.5°C, and the Henley & King paper only underscores this need.

The paper draws attention to a possible surge of warming in the next decades due to natural variability adding to human induced warming. This would have serious adverse implications, including for example, for coral reefs already suffering from unprecedented bleaching by adding to the projected increased warming on decadal time scales.

However, the paper’s conclusion that the Paris Agreement 1.5°C temperature could be breached is problematic for several reasons.

The publication by Henley & King provides an analysis of the modulation of global mean surface air temperature (GMT) projections by the Interdecadal Pacific Oscillation (IPO). The influence of multi-decadal natural variability on GMT is well established and has been analysed by many scholars in the context of the so-called warming slow-down, or hiatus, in the early 2000s (See for example a recent review in Nature).

The authors, however, put their analysis of the role of the IPO in modulating global temperature in the context of the timing of exceedance of the 1.5°C long-term temperature limit in the Paris Agreement, which is problematic for several reasons.

The Paris Agreement’s “long-term temperature” goal refers to warming attributable to human activities averaged over 20-30 years (as in the IPCC AR5) to account for short-term effects of natural variability such as the IPO, not five-year or even annual averages as assumed by Henley & King.

With the long-term temperature goal averaged over 20 to 30 years, the effects of IPO upswings and downswings on the timing of temperature exceedance will be much smaller than the five years that the authors suggest.

Even in a scenario consistent with a long-term temperature limit of 1.5°C, individual years would exceed 1.5°C due to natural variability.

The effect of natural variability on global temperature trajectories introduced by phenomena like the IPO is illustrated by the following figure that displays the warming trajectory of an emissions pathway in line with holding warming below 1.5°C (with a 50% chance). For illustrative purposes, this is overlaid with 20th century natural variability, showing that annual mean temperatures could exceed 1.5°C in individual years or for several years, even though long-term warming does not exceed this level. 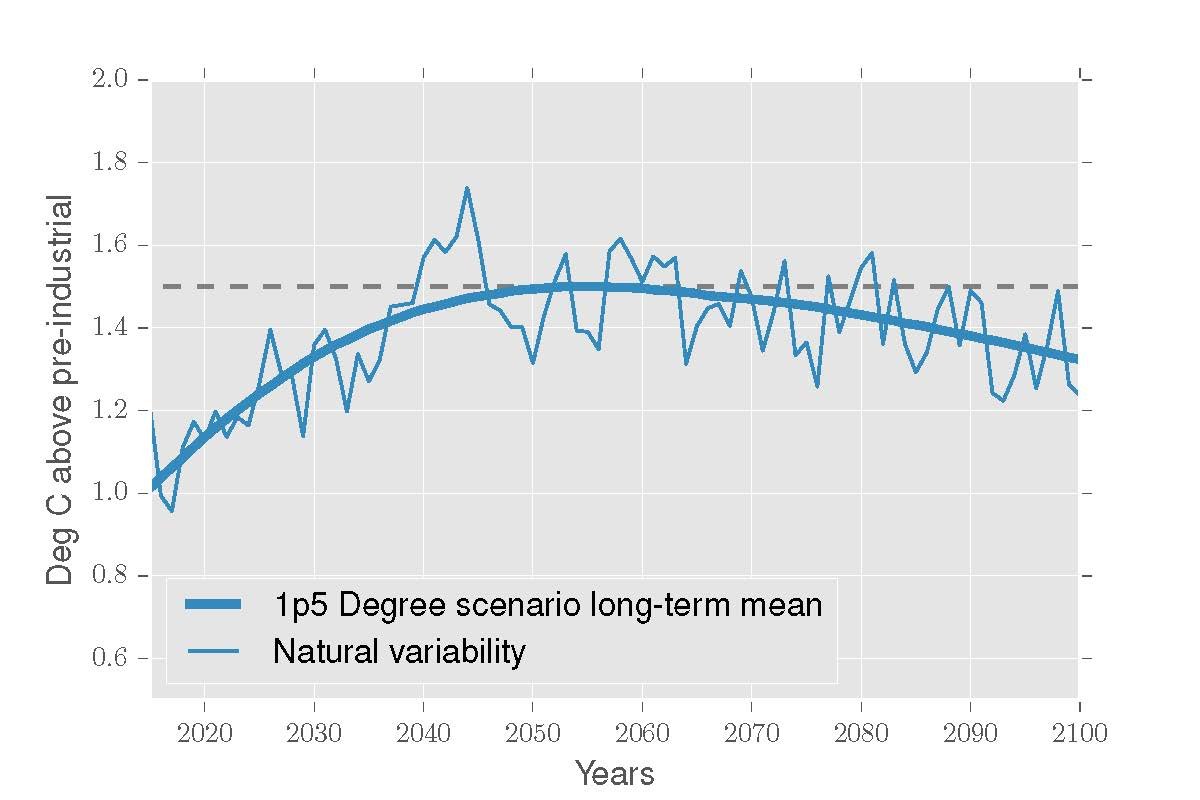 Long-term temperature limits have been adopted based on the risk assessments of future climate impacts over longer time periods, not individual years.

The interpretation of a 1.5°C limit is not based on individual years at a certain global mean temperature, but on climate impact projections assessing the state of the climate system at such warming levels. The analysis underlying these risk assessments factors in the effects of natural variability. Studying the exceedance of a global mean temperature level on annual or five-yearly scale as in Henley & King does not reflect the long term nature of the temperature goal and the analysis thereby does not directly relate to timing of exceedance of the 1.5°C long term temperature limit in the Paris Agreement.

Without stringent near-term mitigation action the IPCC AR5 found that the 1.5°C global mean warming would be reached around 2030 (see e.g. the Working Group 1 Summary for Policy Makers of the IPCC AR5 report).

The analysis in Henley & King only shows that we will exceed 1.5°C if we do nothing and does not provide an analysis of the timing of exceedance under Paris Agreement compatible mitigation pathways or current policies.

In their interpretation, the authors omit the scenario-based nature of their analysis. The conclusions of the ‘timing of exceedance’ of 1.5°C are based on the highest IPCC emission pathway (RCP8.5) rather than one that is consistent with current policies or the requirements of the Paris Agreement.

The global long-term average temperature difference by 2030 of RCP8.5 and Paris Agreement-compatible global pathways is about 0.2°C. Luckily, we live in a world where there is some – if by far not yet sufficient – climate action (Climate Action Tracker Current Policies in the graph below). In a “hold below 2°C” mitigation scenario (RCP2.6), 1.5°C would be reached later, in the mid 2030s. More recent pathways that can be classified as “holding well below 2°C”, returning to 1.5°C or below by 2100, reach 1.5°C, but also exceed this level around this timeframe. 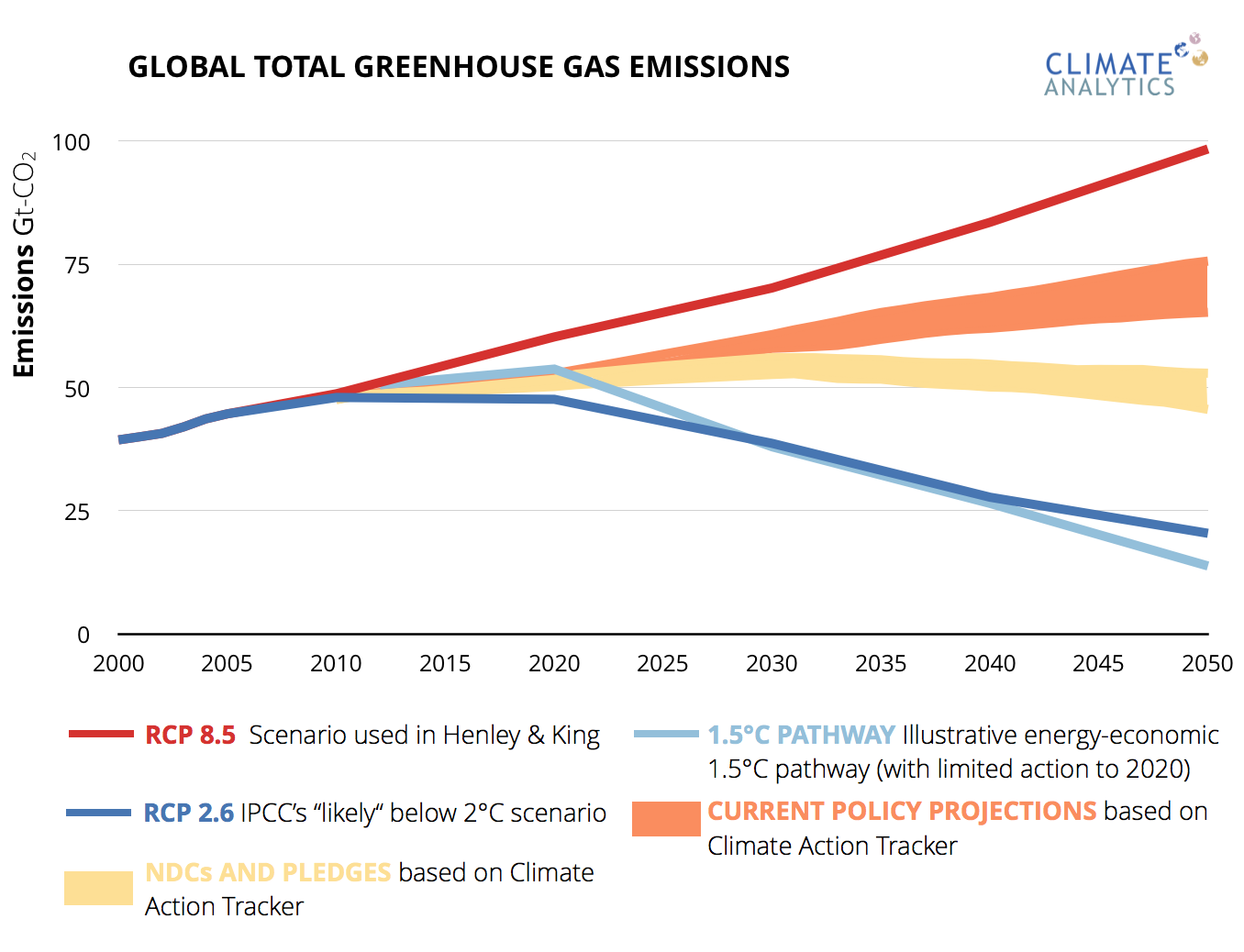 There are several interpretations of what the Paris Agreement’s wording around holding the increase in the global average temperature to “well below 2°C and pursuing efforts to limit warming to 1.5°C” means. Under one interpretation, a temporary overshoot of global mean temperatures to above 1.5°C can be tolerated if decisive action is taken to bring temperatures below the target again by 2100 at the latest. Under another, held by vulnerable countries, an overshoot of 1.5°C is not acceptable.

Presently published mitigation scenarios are consistent with the first interpretation. Whether a mitigation scenario that limits the temperature increase to 1.5°C over the full 21st century can be achieved has not been assessed by the scientific community in sufficient detail, but there is an expectation that the upcoming special report on 1.5°C will provide an analysis of this important question.

The lowest emissions scenarios in the scientific literature to date will return warming below 1.5°C level by 2100 after an overshoot in long-term global mean temperature over the course of the century by 0.1-0.2°C for several decades mid-century. Under such scenarios, with emission pathways shown below, 1.5°C long-term warming would be temporarily exceeded about a decade later than estimated by Henley & King – 2028.

The results of the paper underscores urgency of near term action.

It is clear that rapid improvements in policy and near-term mitigation action (see for example Climate Action Tracker, Mission2020) are required to limit warming to 1.5°C and the Henley & King paper only underscores this need.

But their analysis does not provide a basis for concluding that 1.5°C will be exceeded in 2028 in scenarios with Paris Agreement compatible near-term action. The results of this paper thereby should not be used as arguments that the Paris Agreements 1.5°C limit of global warming will be “breached” very soon.

The 1.5°C temperature limit in the Paris Agreement and 2016 temperature records
Feasibility of limiting warming to below 1.5°C

The draft outline of the IPCC Sixth Assessment Report doesn’t contain an explicit reference to loss and damage but will deal with “residual risks”, “adaptation limits” and “attribution.” Should this outline be adopted at the next IPCC plenary, it would be a missed opportunity to bring the entire spectrum of loss and damage available in the scientific literature into focus and support vulnerable countries in preparing do deal with it.

What does the US withdrawal from the Paris Agreement mean for the world?