In any crisis it is the poorest and most vulnerable that suffer the greatest impacts. What does Black Lives Matter have to do with climate change? Everything – Adelle Thomas and Rueanna Haynes outline the linkages between environmental justice and racial justice.

The global movement in support of the rights of Black people highlights the systemic and institutionalised racism that has resulted in the murders of Black people as a result of police brutality and the suppression of economic and social development of Black communities in America.

The many videos and accounts of horrific incidents of police violence have spurred protests from diverse groups around the world. People of all ethnicities are joining together to demand an end to these appalling acts of violence, including cries to defund the police and allocate resources to community development, education, and other programs that would uplift Black communities.

But, what does Black Lives Matter have to do with climate change? Everything.

In any crisis it is the poorest and most vulnerable that suffer the greatest impacts.

This has been most recently demonstrated by the telling statistics of deaths caused by COVID-19, in particular in the United States where Black and Native American people are dying at disproportionately higher rates. The impacts of the pandemic have laid bare the striking inequality in the US and its racist dimensions.

As summed up by Patrisse Cullors and Nyeusi Nguvu, members of the Black Lives Matter movement, “Racism is endemic to global inequality. This means that those most affected – and killed – by climate change are Black and poor people”. It is for this reason that calls are now being made to centre racial equity and justice in seeking meaningful solutions for the climate crisis.

The direct linkages between environmental justice and racial justice have long been areas of research and activism, and the relationship between climate justice and racial justice builds on these connections.  Long-standing racist policies and practices – such as residential segregation, unequal educational opportunities, and limited prospects for economic advancement – have led to increased vulnerability of Black people to climate change impacts and by extension other global crises that may emerge.

In the United States, disproportionate percentages of people of colour live in places that are polluted with toxic waste, leading to negative health effects such as cancer, asthma, degraded cardiac function and high blood pressure. Research has also highlighted that race has a stronger influence on exposure to pollutants than poverty. This means it is likely that polluters not only site their activities in low income areas, but in some cases are actively selecting locations where there are high percentages of Black people in particular.

Climate change intensifies the health impacts of pollution in these communities. For example, higher air temperatures due to global warming traps air pollutants close to the ground, further reducing air quality and exacerbating existing health issues. A recent study of 32 million US births found that women exposed to high temperatures or air pollution are more likely to have premature, underweight or stillborn babies and that Black mothers are most affected.

Black communities are also disproportionately located in areas that are physically vulnerable to climate hazards, such as hurricanes and flooding. Moreover, they are often afforded unequal levels of protection from the government as compared to protection provided for other groups. For example, Hurricane Katrina highlighted the legacy of unequal flood protection in New Orleans, where racially biased distribution of government funding resulted in subpar levee protection for Black neighborhoods.

Over 80% of the homes that were lost belonged to Black people and Black people made up over half of total fatalities.  Even after Black people bore the brunt of impacts of Katrina, initial plans for redevelopment of New Orleans privileged white communities.  Subsequent hurricanes have exemplified the racial disparity in disaster recovery aid issuance and prioritisation, with Black people being significantly less likely to have access to assistance for household or business recovery. 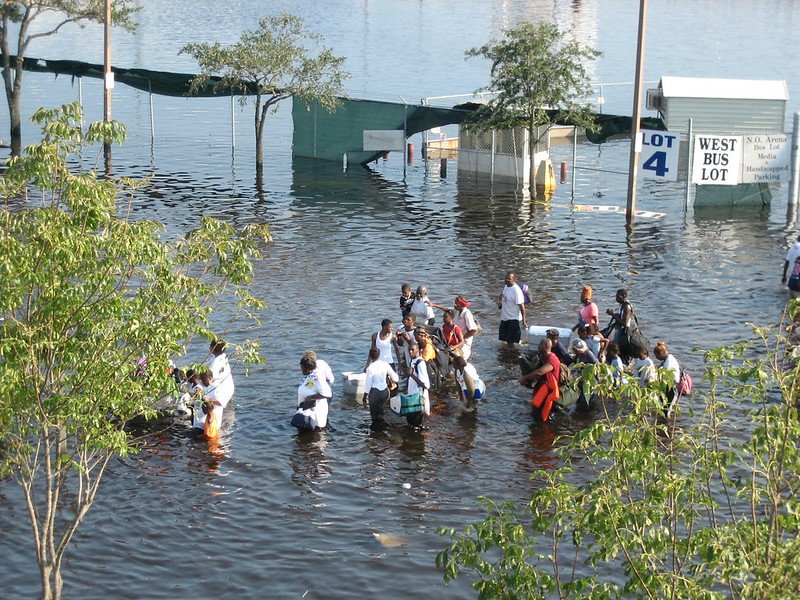 Black people made up over half of total fatalities and over 80% of the homes that were lost during Hurricane Katrina belonged to Black people. Photo by News Muse CC BY-NC-ND 2.0

Just as the Black Lives Matter movement is not solely about police brutality, it’s not just in America where these climate and racial injustices play out. The linkages between racial and climate justice can be seen around the world.

In the climate change sphere, it is well understood that those who will suffer the most from climate change impacts (Small Island Developing States and Least Developed Countries) have contributed the least to the global crisis. But just as in developed countries, for developing countries this inequality in distribution of impacts is also relevant at the community level.

Globally, the linkages between climate and racial justice have not gained the recognition they should in the broader climate change movement. At the level of international climate negotiations, the rate of progress on these fronts is still too slow. The human rights lens on climate change in the global discussion has only gained limited traction with some minor progress on the gender and climate change front.

In addition to this, systemic racism in the climate movement also results in the marginalisation of Black expertise including scientists and practitioners, as European perspectives are generally supported, prioritised and magnified. Black climate experts face the additional burdens of operating within racist structures while also trying to address climate change. The climate movement simply does not have a good track record of handling issues of equity or understanding climate change in dimensions beyond strictly environmental.

However, the Black Lives Matter movement is bringing much needed attention to these issues and will hopefully continue to spur positive change. Due to the movement, climate activists around the world are increasing their support for climate justice and racial justice.

These are complex issues and there are no simple fixes. The task of dismantling systemic and institutionalised racism requires more than superficial gestures, but instead entails assessing, changing and even eliminating long-standing systems that lead to inequality. Supporting organisations committed to racial and climate justice and eradicating policies that marginalise Black people and communities of colour are just a few of the widespread changes that must happen.  The time has come for the climate change community to recognise and act upon the racial injustices that increase the risks of climate change for Black people and other communities of colour.

Read more in the series of blogs:

Germany's coal exit law, or the politics of inertia

While it is positive that Germany is moving to legislate a coal exit, the draft law threatens to undermine its place in history as a climate policy leader, as it would allow highly polluting lignite to burn until 2038, well beyond the Paris Agreement compliant 2030 deadline for OECD countries.

Small island developing states (SIDS) have long been recognised as being particularly vulnerable to the impacts of climate change. In a recently published article our researchers added further scientific evidence that island states are particularly at risk, and face unique challenges in addressing impacts.