As experts gather at the Suva Expert Dialogue 2-3 May in Bonn, ministers and ambassadors from vulnerable countries renewed their call for support to cope with climate-related loss and damage. As discussions on possible solutions to loss and damage in developing countries progress over the next two days, it is worthwhile to highlight key questions that must be taken into account: responsibility, feasibility and affordability.

The benefits of comprehensive risk management or climate risk management are often pointed out in the context of loss and damage. However, we will not arrive at practical solutions unless we address the crucial questions of responsibility, feasibility and affordability.

The calculation is simple: the more damages you experience, the higher your costs of reconstruction; the higher your risks, the costlier your risk transfer. International support is needed across the whole spectrum – enabling countries to assess and reduce their risks as well as then actually coping with losses in a sustainable and systematic manner.

The recent case of Antigua and Barbuda is illustrative of how countries cope and challenges they encounter in recovery from climate-related loss and damage. In 2017, Barbuda was hit by Hurricane Irma, a category 5 storm, which resulted in unprecedented displacement of the entire population and destruction of over 90% of its infrastructure. In addition to loss of electricity and damage to housing, animal carcasses contaminated water supplies and increased the risk of spreading disease. The government declared a state of emergency, ordering mandatory evacuations of the island’s 1,500 residents to its neighbor island Antigua. Barbuda became uninhabited for the first time in over 300 years.

In the months following the storm, Barbuda remained largely unpopulated, although many residents longed to return home. Communal land ownership, lack of home insurance and high percentage of renters- residents were either financially unable to rebuild or unclear about their role in the rebuilding process- added challenges to the extensive recovery efforts.

Government-led recovery efforts were also slowed by a desire to rebuild in a more climate-resilient manner, rather than going back to business as usual. This approach required more financial resources than the government had available, while the already high national debt disincentivised additional international borrowing of the more than US$200 million needed to rebuild. Debt relief, international aid and attracting private investment to the island are viewed as the most feasible options for Barbuda’s recovery. However, this approach may lead to a loss of the traditional collective ownership of land that has been in practice on the island since abolition of slavery in 1830.

What will the situation look like in the future? Studies have shown that half a degree increase in global temperature in the recent past has resulted in substantial increases in extreme weather events. Already at 1°C warming since the industrial revolution, warm spells have become significantly longer in half of all land areas and extreme precipitation – often leading to deadly flooding – has increased by at least 9% in a fourth of all land areas. The more we move outside the range of natural variability – the ups and downs that human and natural systems are used to – the more pronounced these changes are likely to be. And we know that changes are here to last. A recent studyhas shown that each 5-year delay in peaking emissions leads to 20cm more sea-level rise in the long term.

But even just assessing the risks and scale of expected losses from climate change is the first big challenge for developing countries to prepare and cope with such situations like that which Antigua and Barbuda faces. A closer look at different loss and damage assessment methods shows why proper assessments are often missing in vulnerable developing countries.

Overall methods focus either on assessments in anticipation of climate-related events or after a specific event. Our overview shows that both types of methods come with substantial challenges and are often not comparable due to the lack of a baseline which they could be compared against. 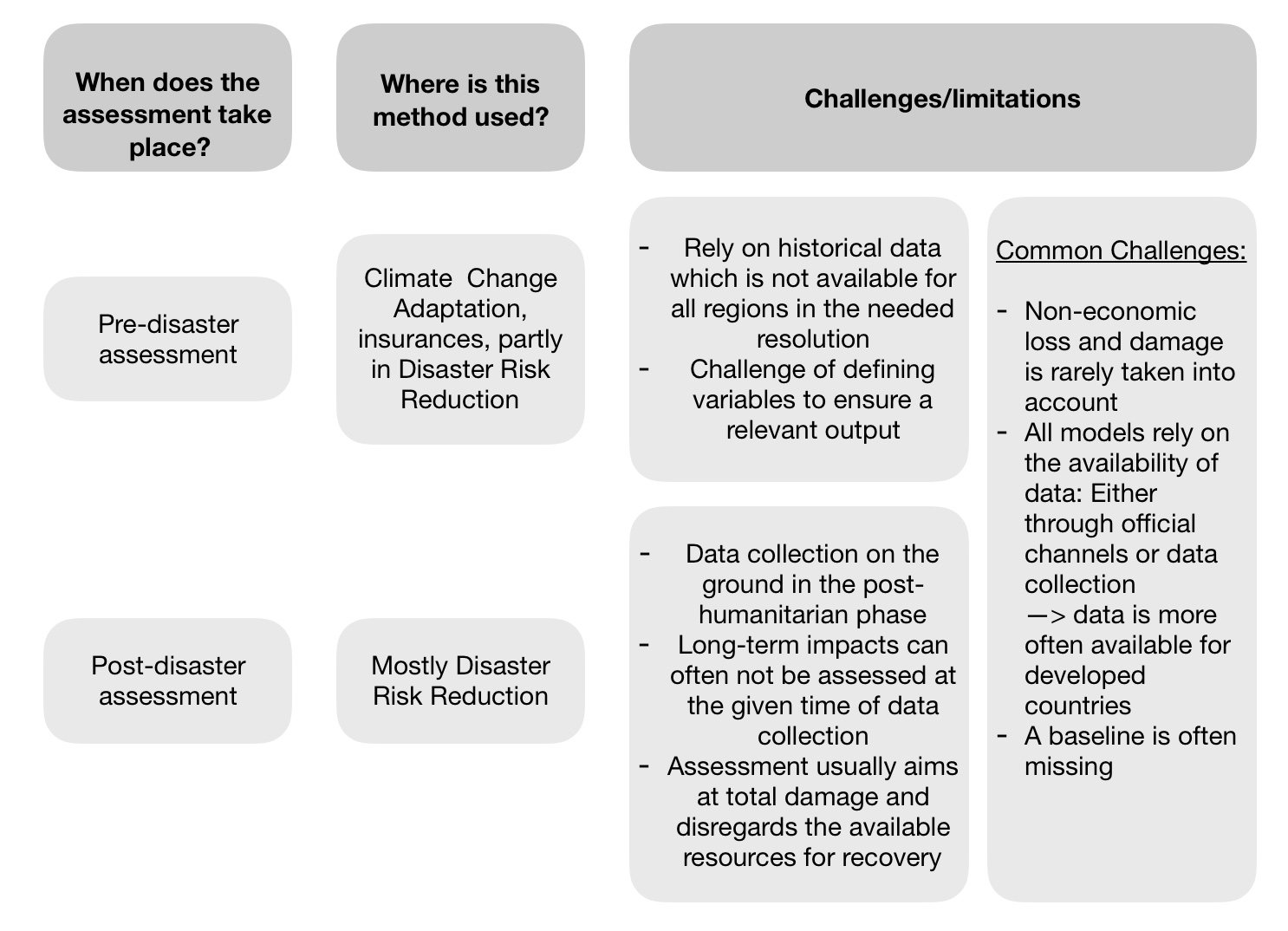 Analysis of different assessment methods exposes that developing countries in particular face limitations due to lack of available data and limited expertise in utilizing methods. In addition, most methods are not fit to analyse non-economic loss and damage such as loss of life, displacement of communities or loss of social cohesion, which are relevant for the economy, especially in developing countries. Also, long-term impacts are often not included in assessing loss and damage after extreme events, due to time pressures when collecting data. Thus, lack of relevant methods and lack of data combined with scarce resources for proper assessment contribute to insufficient preparedness for the increasing risk of climate related disasters.

There are many gaps to fill when it comes to addressing loss and damage in developing countries. Facilitating risk assessments is but one important step to better prepare for the inevitable.

Yet being able to estimate future losses does not mean countries will be in a position to shoulder these losses themselves. The International Monetary Fund in its 2017 World Economic Outlook clearly states that while domestic policies and national adaptation strategies can reduce impacts for developing countries, “the international community must play a key role in supporting these countries’ efforts to cope with climate change—a global threat to which they have contributed little”.

Developing countries have contributed little to climate change and are in no position to cope with resulting loss and damage by themselves. They lack the adequate resources – including data and capacities – to develop and implement solutions. Climate change further undermines their abilities to fill those gaps. The questions of feasibility, affordability and responsibility are thus key when scoping and devising solutions to loss and damage in developing countries and should be front and center during the Suva Expert Dialogue.

Just as the voices of vulnerable nations were critical in including the 1.5°C limit in the Paris Agreement, it is also critical that experts from these states play an active role in authorship of IPCC reports. It's encouraging to see that the composition of the body of experts selected to put together the Special Report on 1.5°C and the Sixth Assessment Report increasingly reflects this.

Taking stock of the Global Stocktake

A comprehensive five-yearly assessment of progress on climate action – the Global Stocktake – is an essential part of the Paris Agreement’s ‘ratchet up’ mechanism for keeping the 1.5°C limit and other Paris Agreement goals within reach. How are we faring?