Just as the voices of vulnerable nations, including Least Developed Countries (LDCs) and Small Island Developing States (SIDS), were critical in including the 1.5°C limit in the Paris Agreement, it is also critical that experts from these states play an active role in authorship of IPCC reports. It’s encouraging to see that the composition of the body of experts selected to put together the Special Report on 1.5°C and the Sixth Assessment Report increasingly reflects this.

At the climate negotiations here in Bonn, developing country groups – including AOSIS and LDCs – are advocating for greater ambition in meeting the Paris Agreement’s goal of limiting global warming to 1.5°C above pre-industrial levels. During sessions and side-events, there has been much discussion and anticipation of the upcoming IPCC 1.5°C Special Report and how it will inform COP24 in Katowice later this year.

As developing countries push within the UNFCCC for governments to increase their climate action, it is also important that experts from these regions are included as authors in the IPCC process.

IPCC assessment reports provide a number of opportunities for countries and experts to engage in the process, including initial scoping of report outlines, authorship and reviewing and providing comments on drafts.

Coordinating Lead Authors, Lead Authors and Review Editors of the reports are nominated by governments and IPCC observer organisations, selected on the basis of their expertise,  and represent a variety of scientific, technical and socio-economic viewpoints. The IPCC pays close attention to including authors from different regions, from developed and developing countries, as well as seeking a gender balance. How is it doing?

For the highly-anticipated upcoming 1.5°C Special Report due in October, from the 560 nominations it received, the IPCC chose 86 Authors and Review Editors from 39 countries. 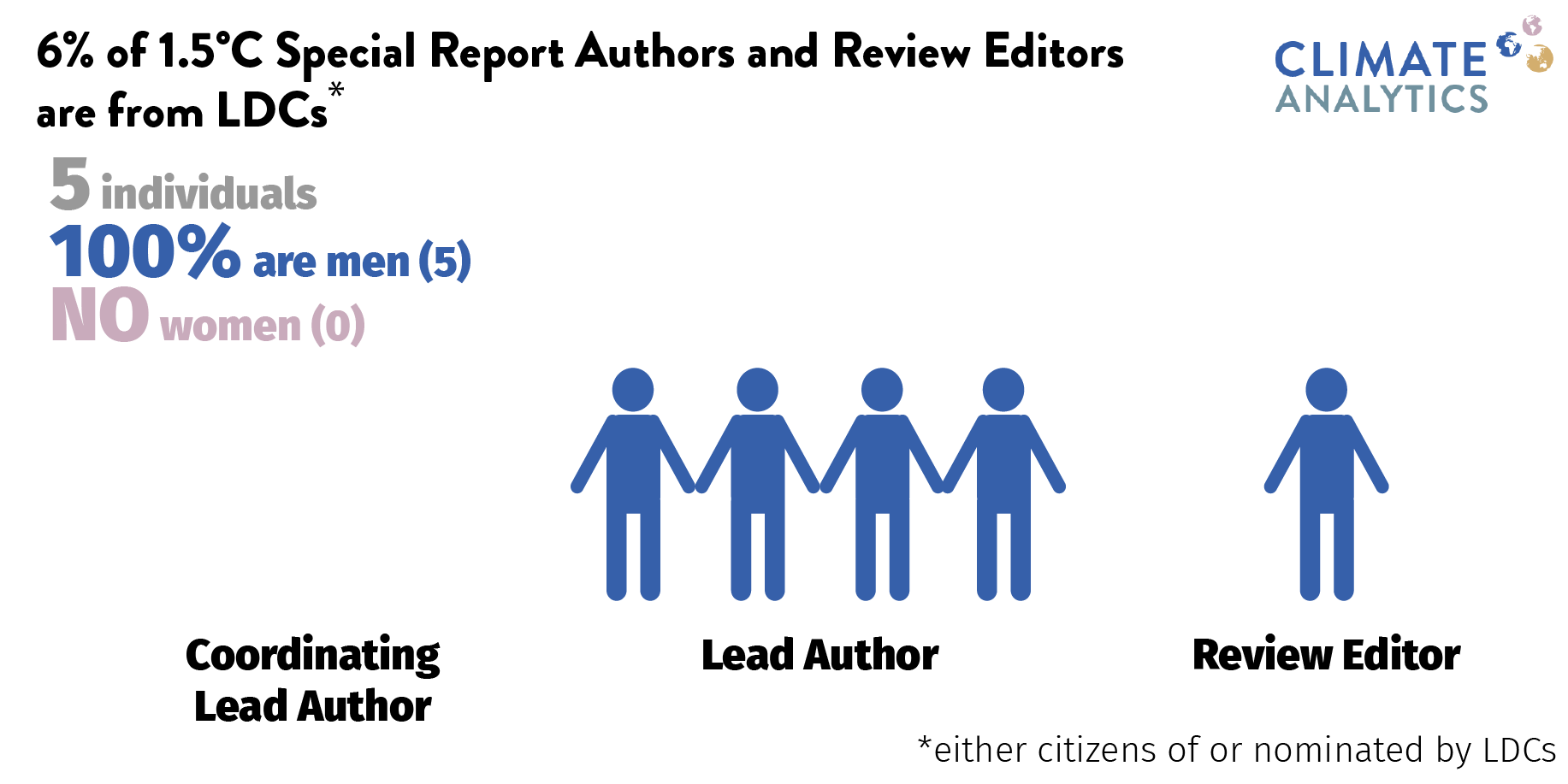 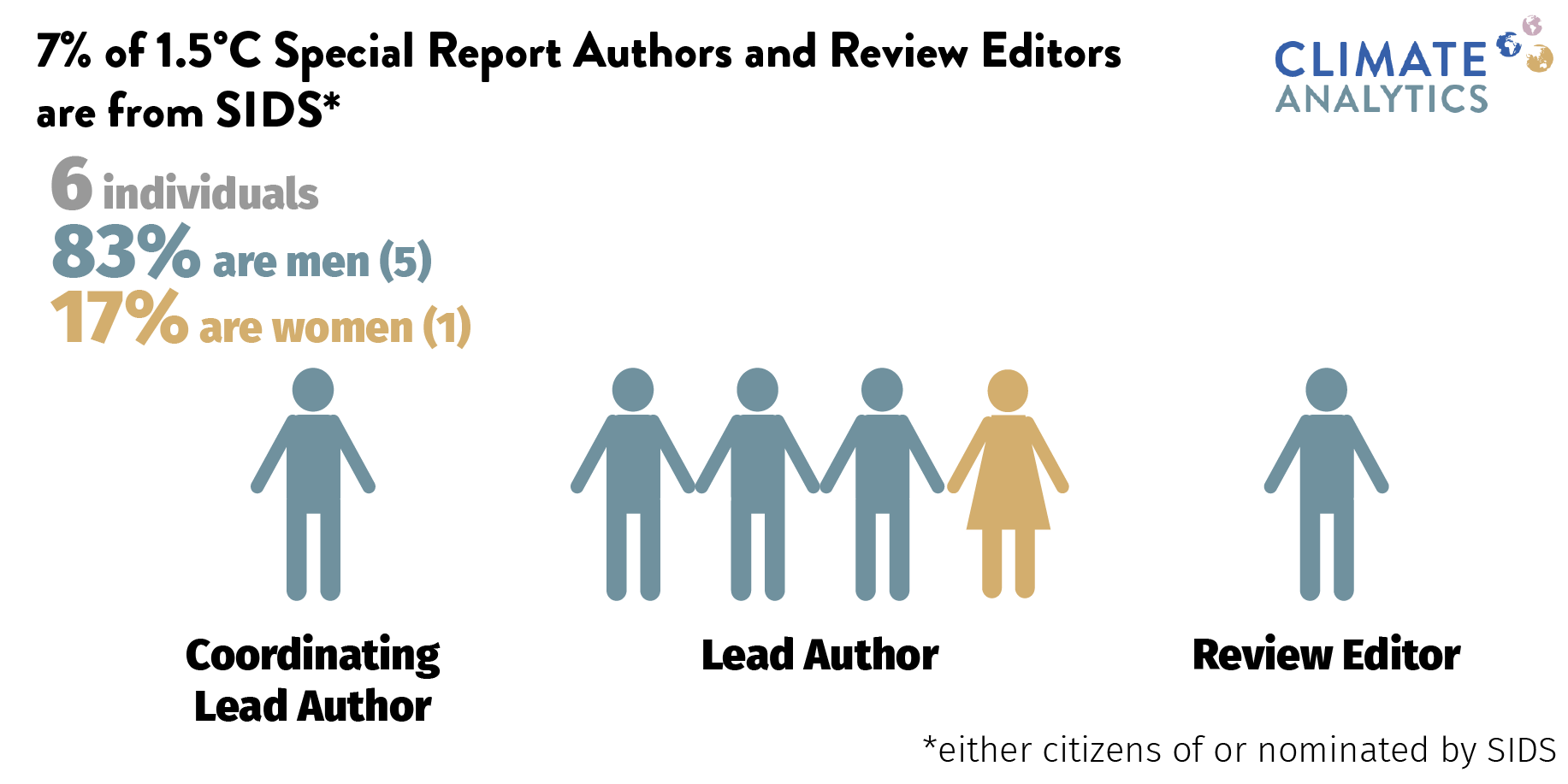 For the upcoming Sixth Assessment Report (AR6) – 2,858 experts were nominated from 105 countries, from which the IPCC selected 721 Authors and Review Editors from 90 countries.

Authors and Review Editors from SIDS and LDCs are represented in similar percentages as in the 1.5°C Special Report:  LDCs have 47 experts (7%), and SIDS 28 experts (4%).

For the 1.5˚C Special Report, there is just one lone female expert from the 84 countries that make up the combined LDCs and SIDS.  The situation has improved for the AR6 where there are ten women (over 20%) from the LDC’s, and eight women (almost 30%) from SIDS.< 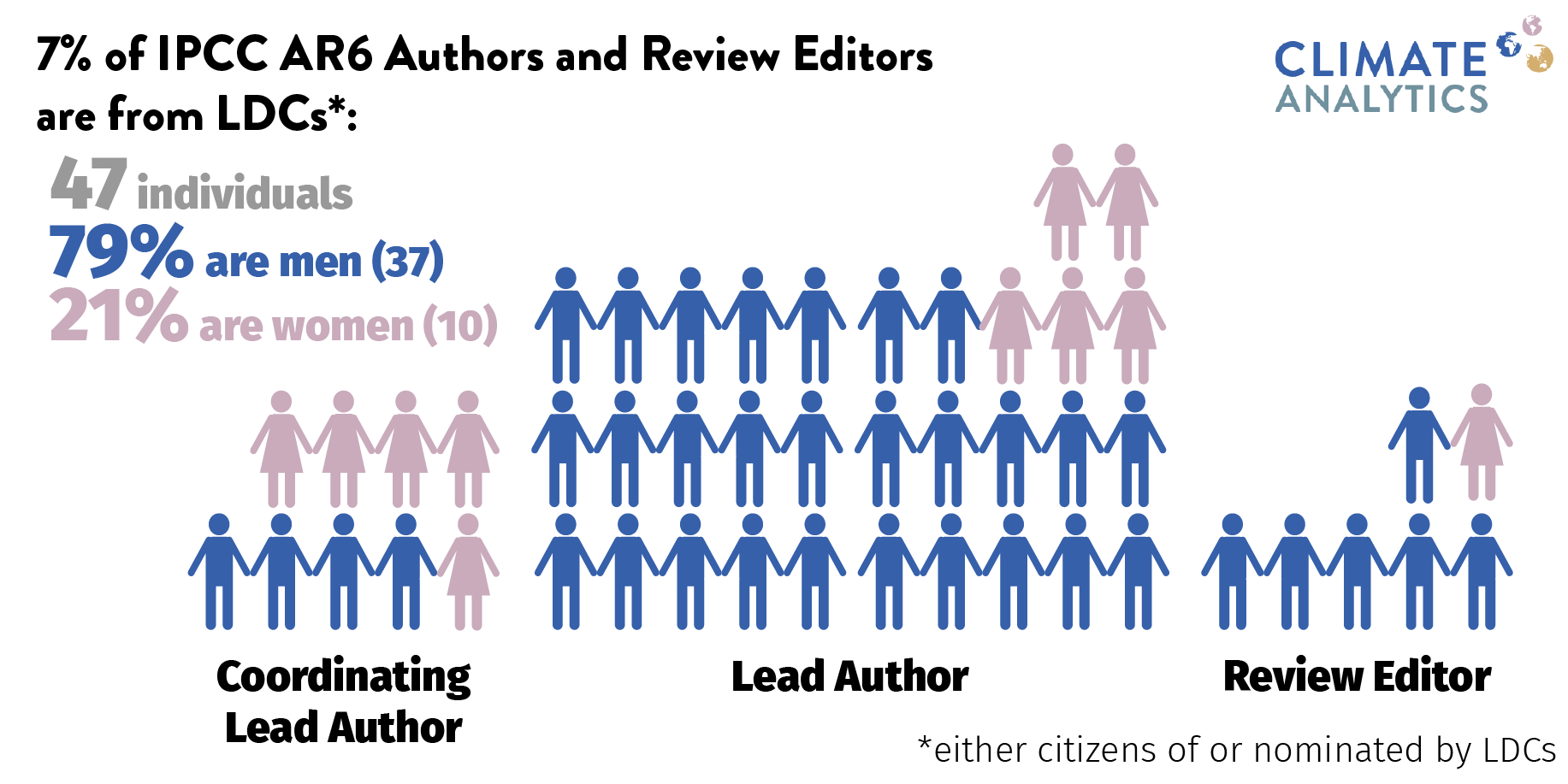 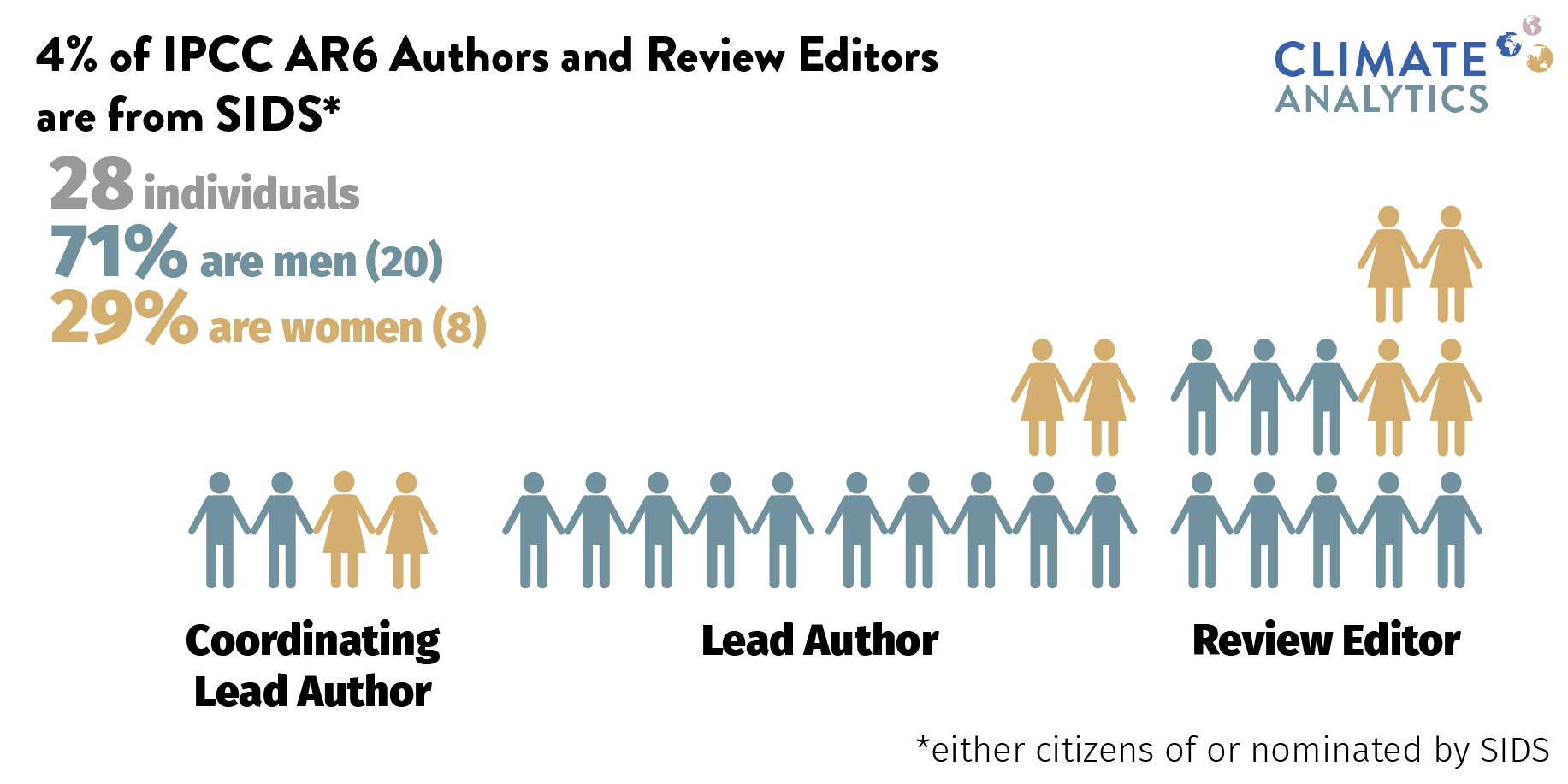 It is encouraging to see that over these three reports, the IPCC is including more experts from LDCs and SIDS, and women (although these numbers are still low). Why is this important?

The experiences and knowledge of LDC and SIDS experts helps ensure that perspectives and issues important to their regions are included in the scientific reports that then feed into the UNFCCC process.

These experts often have first-hand experiences of the challenges facing their regions – such as devastating direct impacts of extreme events as well as indirect impacts that often don’t make it into the scientific literature, but which can be important to, for example, the IPCC’s assessment of climate impacts.

For example, Hurricane Irma in 2017 resulted in destruction of the majority of infrastructure and displacement of all residents from Barbuda for the first time in 300 years. However, plans for rebuilding also threaten to end the traditional collective ownership of land – a practice that has been in place since the abolition of slavery in the early 1800s.  This is information that would not be known outside the region, but which adds to the overall picture of adaptation.

Regional experts are also aware of regionally and nationally-specific publications that may be published in more obscure journals, publications that are not as easily accessible or as highly referenced as literature in larger journals. However, these publications are critical in increasing the peer-reviewed literature base focused on often under-researched developing regions.

Bahamas-based Dr Adelle Thomas from Climate Analytics is both an AR6 and 1.5˚C Special Report Author.

Taking stock of the Global Stocktake

A comprehensive five-yearly assessment of progress on climate action – the Global Stocktake – is an essential part of the Paris Agreement’s ‘ratchet up’ mechanism for keeping the 1.5°C limit and other Paris Agreement goals within reach. How are we faring?

Small Island States face the alarming prospect that their sovereign credit ratings might be downgraded over time due to climate risks and impacts. This could land them in a type of “financial trap,” leading to challenges in managing national finances, dependence on foreign aid and increasing vulnerabilities to climate change.