Fossil fuel divestment started as a grass-roots movement and, as it gains momentum, more and more actors – university campuses, cities, pension funds, banks, to name but a few – commit to move away from investing in coal, oil and gas. Divestment campaigns have been increasing the pressure on governments and institutions in the run up to the upcoming climate summit in Paris but will also play an important role once the expected global agreement to halt climate change is in place.

As the global community is moving closer towards the Paris COP21 at the end of the year, a worldwide and fast-growing network of campaigns and campaigners is working towards fossil fuel divestment in communities. The campaigns are based in local communities and challenge local institutions and governments to shift their public resources away from oil, coal and gas ahead of the Paris Climate Summit in order to send a powerful signal that the world is rapidly and irreversibly moving away from fossil fuels.

Recently representatives from politics, academia and civil society discussed the role of local divestment strategies for the Paris climate negotiations at an event organized by Fossil Free Germany in Muenster. I was invited to join EU Parliament Member Reinhard Bütikofer (Bündnis 90/Die Grünen) and the Fossil Free Germany Campaign Coordinator Tine Langkamp on the panel to contribute some views on international climate finance. 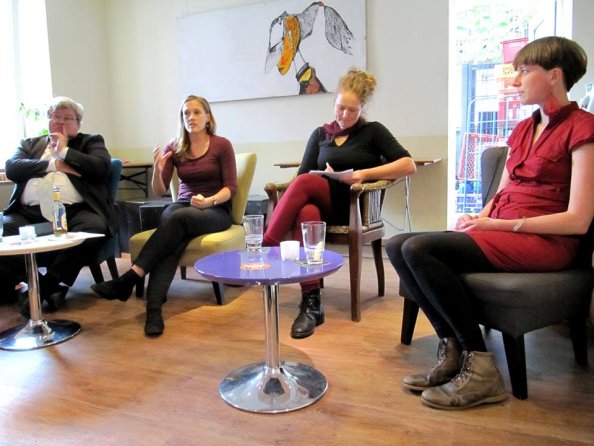 The fossil fuel divestment movement was started by environmental group 350.org in November 2012 on college campuses in the US and has since gained momentum through decisions of some major investors in several countries to divest from fossil fuel assets, including by the Rockefeller Brothers Fund to divest from coal and tar sands investments, by France’s largest insurance company AXA to divest from coal assets and triple “green investments” to 3 billion euros by 2020, and by the Norwegian parliament to divest the Government Pension Fund from coal assets. As the first big success in Germany, the city of Muenster is now on its way to become the first German city to officially divest its portfolio from fossil fuel companies.

An expert report by Arabella Advisors finds that, to date, 436 institutions and 2,040 individuals across 43 countries and representing $2.6 trillion in assets have committed to divest from fossil fuel companies. In 2014 the movement was mainly led by foundations, universities, faith-based organizations and NGOs. Today 95 percent of the combined assets committed to be divested are held by large pension funds and private-sector actors.

Today the moral argument has converged with financial arguments through financial analysts’ recognition of significant climate risk to investment portfolios – the “carbon bubble”, which is the threat of assets in unburnable carbon becoming stranded as the shift to a low-carbon economy accelerates.

The divestment movement is backed not only by prominent supporters such as most recently the Leonardo DiCaprio Foundation, but also by high-level figures and officials including Archbishop Desmund Tutu from South Africa, World Bank President Jim Yong Kim, EU’s former climate commissioner Connie Hedegaard, UN Secretary General Ban Ki-moon, and the Secretariat of the UN Framework Convention on Climate Change (UNFCCC).

The transformative character of the divestment movement can perhaps be nowhere better seen than in the decision of the city of Newcastle, New South Wales, host to the world’s biggest coal port to divest its investments in coal. This city understands that coal is not the future and that diversification to and environmentally sustainable industries is the future. 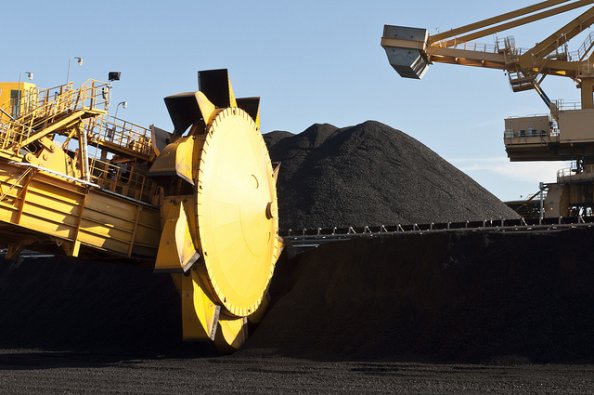 At the presentation of the Intergovernmental Panel on Climate Change’s (IPCC) 2014 Synthesis Report last September, Ban Ki-moon urged insurance companies and pension funds: “Please reduce your investments in the coal- and fossil fuel-based economy and move to renewable energy.” Earlier this year, the UNFCCC has lent its “moral authority” to the divestment movement and its Executive Secretary, Christiana Figueres, supported the campus divestment campaign of her alma mater Swarthmore College in Pennsylvania in an open letter saying that the decision would be both a moral imperative and an economic imperative of long-term investment: “Under the UNFCCC all governments of the world are currently constructing a universal framework that will provide an even stronger directional signal to capital markets.”

What climate finance could learn from the divestment movement

The growing success of the divestment movement demonstrates that international climate diplomacy is becoming more and more complex as the climate regime is becoming more relevant to a wide variety of actors and the focus is shifting to implementation, with both state and non-state actors developing new approaches and solutions to the climate change challenge.

However, until today, it seems that the directional signal from the multilateral climate regime to the real economy has not been strong and clear enough. The recently published OECD Inventory of Support Measures for Fossil Fuels 2015 confirms that public support to fossil fuels remains high and that the time is ripe for countries to demonstrate they are serious about the transformation to a low-carbon global economy this century, as committed to by the G7 leaders’ declaration in June this year, and as very recently emphasized by the United States and China Issue Joint Presidential Statement on Climate Change.

The study finds that governments in the OECD and the BRIICS (Brazil, Russia, India, Indonesia, China and South Africa) collectively support fossil fuels with 160 to 200 billion US dollars a year. At the same time, developed countries are working to mobilise 100 billion US dollars a year by 2020 as financial support for developing countries in order to meet the climate finance commitment set by the international community under the UNFCCC. Thus the Paris Climate Summit does not only present a unique opportunity for communities, cities and investors to divest from fossil fuels but also for governments to commit to phase out support for the consumption and production of fossil fuels.

During the past years, global grass-roots movements promoting bottom-up climate action such as the divestment campaign together with various efforts at all levels, e.g. political commitments to decarbonise the global economy over the course of this century made at the G7 summit, the People’s Climate March last September and the Pope’s climate change encyclical, have contributed to build up significant momentum for agreeing on an ambitious global climate regime. The UNFCCC remains at the core of this regime, and what is at stake in Paris is to translate this momentum into a universal legally binding agreement that scales up these diverse efforts through a regulatory framework that creates the domestic and international conditions and incentives for the transition towards a low-carbon and climate-resilient global economy.

The timeframe to achieve this transformation is very limited to avoid long-term carbon lock-in that would severely threaten the feasibility of the 2/1.5 degree goal. This means that unprecedented international cooperation and coordination across all levels of society will be required. The good news is that the financial sector is already reacting to the financial risk posed by climate change. 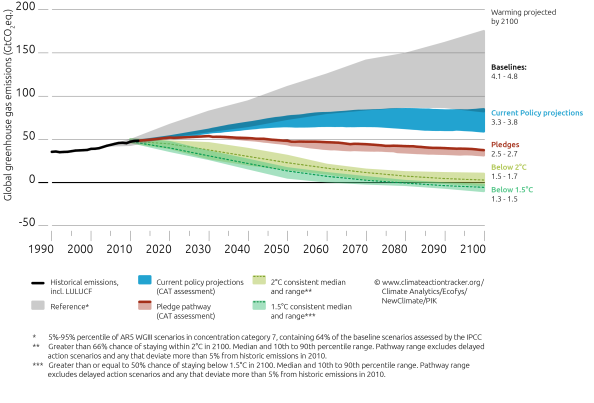 The Climate Action Tracker estimates that emission reduction targets, or Intended Nationally Determined Contributions (INDCs) for 2025 and 2030, submitted to the UN ahead of the October 1 deadline, would bring warming down to 2.7˚C, if fully implemented.

The Bank of England Governor Mark Carney very recently warned that climate change and related shifts in climate change policy could become one of the biggest risks to economic and financial stability, which is why investors need the information to invest accordingly. What is more, several major financial institutions in the U.S., including the Bank of America, Citi, Goldman Sachs, JPMorgan Chase, Morgan Stanley and Wells Fargo, issued a joint statement calling for leadership and cooperation among governments for commitments leading to a strong global climate agreement. Jointly the banks express their need for clear, stable and long-term policy frameworks to accelerate and further scale investments in climate solutions.

A globally binding multilateral climate agreement with ambitious commitments to emission reduction targets and timetables to achieve a long-term global goal can send a clear and credible signal to all elements of society – economy, private sector and civil society- that the world’s governments are serious about embarking on a low-carbon trajectory. At the same time, as climate diplomacy is inextricably linked to broader domestic priorities and national interests on energy, development and consumption, bottom-up movements that contribute to reshape these debates locally and nationally are indispensable for advancing the international climate regime.

Thus the UNFCCC, and the pending Paris Agreement, can and must provide strong incentives and political signals for international cooperation to rapidly decarbonise the global economy. The international level can interact synergistically, reinforcing and being reinforced by, national and regional bottom-up initiatives at this level it is essential to increase, accelerate and support actual transformation in the real economy and demonstrate feasibility of innovative solutions on a smaller scale.

The recently adopted Hanover Declaration “Local Action Driving Transformation” from the ICCA 2015 conference is an example of how local actors a driving transformation and at the same time looking for a strong international agreement to be adopted in Paris to further drive this momentum.

Recently UN experts warned of climate change induced risks to food security. More frequent and intense weather extremes as well as a general rise of mean temperature and sea level will cause this risk to grow. Food security and climate change were high on the agenda at the Tropentag conference, bringing together over 1000 experts to seek solutions to the biggest challenges in tropical and sub-tropical agriculture.

At its latest meeting 2-5 November in Livingstone, Zambia the Green Climate Fund Board strengthened the Fund’s accreditation framework by agreeing on a policy to review every five years to what extent the GCF’s implementing partners’ overall portfolio of activities - beyond those funded by the GCF - have evolved in the direction of the Fund’s goal to promote a paradigm shift. Partners that continue to heavily invest into coal and other fossil fuels are now at risk of loosing their accreditation after their initial accreditation period ends.