While many parts of the world are shifting away from fossil fuels, Southeast Asia remains a hot spot for coal expansion. The energy mix in Southeast Asia is already a problem for climate change, and it is set to get worse according to recent research, with plans for new coal-fired power plants across the region. This is in stark contrast to the need to phase out coal by 2040 to achieve the Paris Agreement goal of limiting global warming to 1.5 degrees Celsius.

Tackling this requires understanding the factors behind it. These include economic growth, urbanisation and a rapidly growing population, but also a lack of awareness of the risks of climate change, as well as foreign funding of energy infrastructure, according to a recent report published by Friedrich-Ebert-Stiftung (FES) in cooperation with Climate Analytics, the Climate Change Working Group in Vietnam (CCWG) and Climate Action Network (CAN) Southeast Asia.

Worldwide, the economic case for renewable energy is growing, and the viability of building new coal plants, or even maintaining existing ones, is shrinking. But this trend is not taking off in Southeast Asia. The region is home to only 4 percent of the current global coal capacity, but to 15 percent of the new power plants planned or under construction worldwide.

Coal-fired power generation grew 12 percent in the region in 2019, while it dropped elsewhere. Altogether, coal capacity has more than doubled in Southeast Asia since 2010. 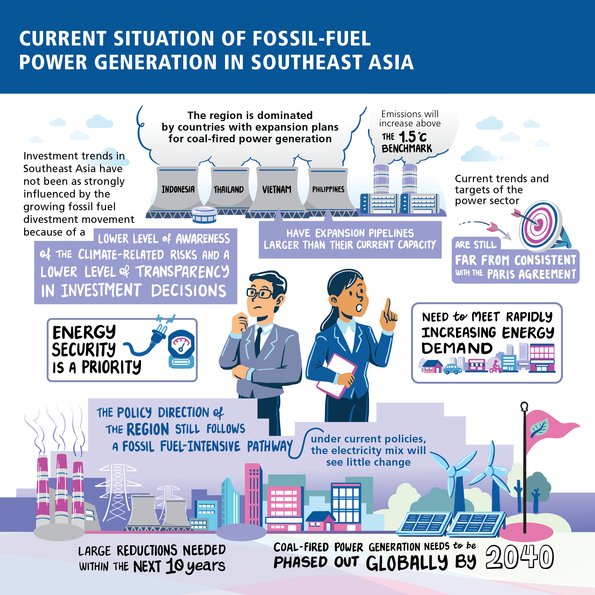 What is driving this trend against all long-term economic and environmental logic? We need to look beyond the region.

Government money in China, Japan and South Korea is still strongly financing coal expansion in Southeast Asia. Through treasury funds or state-owned utilities, these countries have put around USD 24 billion for around 16 gigawatts of coal projects in Indonesia, and USD 16 billion for around 15 GW in Vietnam, according to the Coal Finance Tracker by EndCoal.

At home, these countries have all three committed to net-zero emissions levels by mid-century. And Japan announced in July it was cutting back on its international funding of fossil fuel projects. 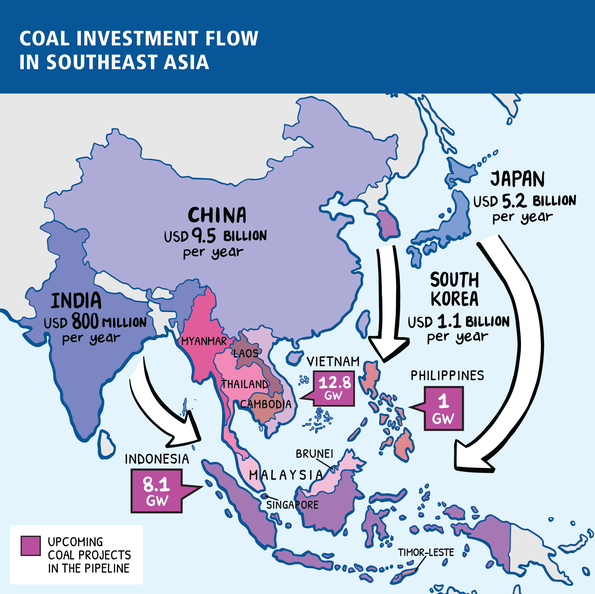 There are also signs of positive change in Southeast Asia. In 2020, the Philippines announced a moratorium on new coal, which could remove up to 10 GW of planned coal capacity from the current pipeline. Vietnam saw a record increase in solar capacity in 2019 and the first half of 2020, and is moving towards plans to limit coal and enhance renewable energy.

But even if possibilities for fossil fuel divestment are improved, policy uncertainty and other barriers persist across the region, potentially driving investments for renewables elsewhere.

Indonesia, as one of the major coal exporting countries of the world, supports its own coal mining and production industry with a range of subsidies and public finance. Thailand’s fossil fuels are focused on its large gas sector, which has strong ties to government. Vietnam added 5GW of renewable energy in 2019, but its coal pipeline is still huge.

These vested interests have led to over-investment in electricity capacity in some areas. The high reserve capacity is justified by overestimated demand increases, while other parts still do not have access to reliable electricity.

These vested interests are driving the “cheap coal” myth. Unpacking this relationship is key to overcoming the barriers to investments and driving the transition to renewable energy. We need to change the narrative, and this is where civil society organisations can play a pivotal role by publishing the right information to the right audience.

For example, the electrification of transport is making little progress in Southeast Asia, with the partial exception of two and three-wheelers. In contrast to China or India, there are no strong policies to support electric mobility, which would not only reduce air pollution but also increase the share of renewable energy. In the region, only Indonesia, Malaysia, Singapore and Thailand have electric vehicle deployment targets. 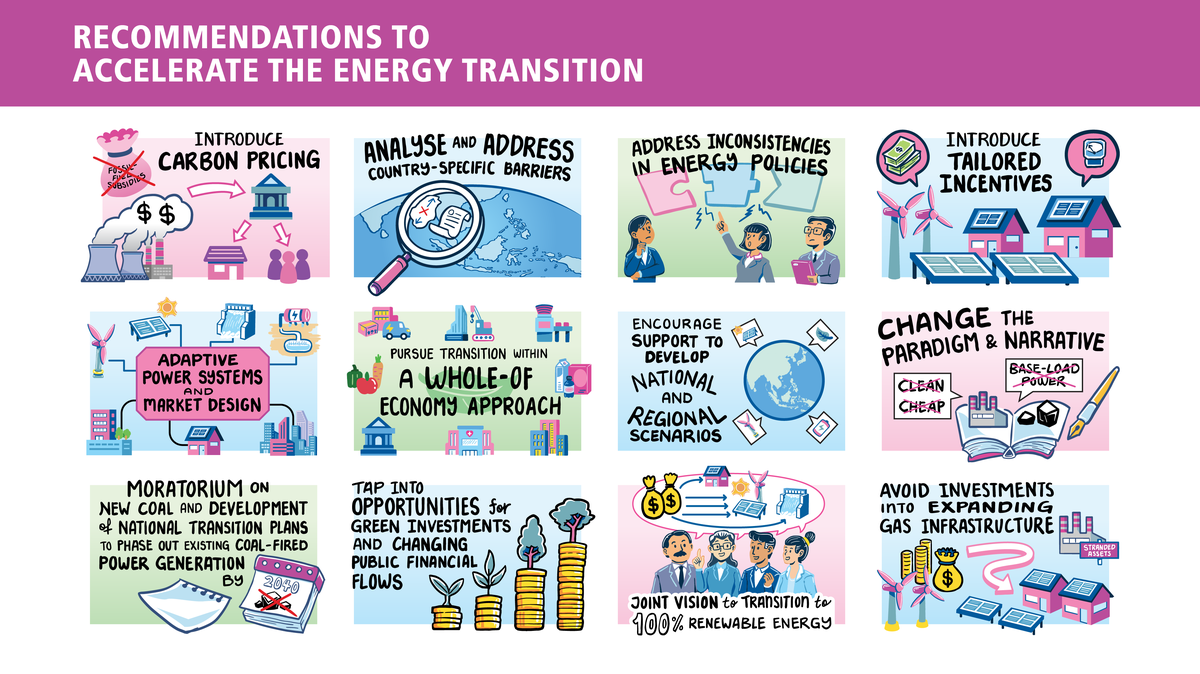 For the reduction of coal use, following the Philippine example of a moratorium on new plants could be a very important step for other countries in the region. Such a moratorium combined with a plan to phase out existing coal by 2040 across the region would be a game changer and an important signal for investors. However, this would need to be combined with support for renewable energy and electrification of transport and industry.

Furthermore, care must be taken to avoid stranded assets, in the form of investments sunk into power plants that end up being decommissioned before the end of their natural life. This applies to new coal plants but also to any gas power facilities, as gas may be cleaner than coal but is still inconsistent with any zero-emission strategy.

Southeast Asia can and must also build on its vast and barely tapped potential for solar and wind, as well as focus regional cooperation around a joint vision to a just transition to fully renewable energy systems.

The 1.5℃ global warming limit is not impossible – but without political action it soon will be

Whether Earth can stay within 1.5℃ warming involves two distinct questions. First, is it physically, technically and economically feasible, considering the physics of the Earth system and possible rates of societal change? Science indicates the answer is “yes” – although it will be very difficult and the best opportunities for success lie in the past.

Ocean thermal energy conversion – what is it and what role could it play for Small Island States in the Caribbean?

In a recent paper for the first time, we have used Geographical Information Systems (GIS) tools to determine where water depth and proximity to shore could provide a site for ocean thermal energy conversion installation for all islands in the Caribbean. But this technology is still the poor cousin in the renewables family, leading many to ask – what is ocean thermal energy conversion and what can it bring to the table to support a 100% renewable electricity system?