Carbon dioxide removal (CDR) – also known as “negative emissions” – is needed to achieve the goals of the Paris Agreement. This means that solutions – whether natural or technological – and governance mechanisms will need to be ready for scale-up in the next couple of decades. But who should bear the responsibility for developing and deploying CDR?

The need to remove CO2 from the atmosphere is, in many ways, a looming hot potato for climate policy.

Some worry that it could be seen as a “get-out-of-jail-free-card” for delaying essential emission reductions, placing undue burden on today’s youth and future generations. There are also well-founded concerns about undesirable consequences, such as increased demand for land and water, which could pose risks to food security.

Nevertheless, carbon dioxide removal (CDR) – also known as “negative emissions” – in some form is needed to achieve the goals of the Paris Agreement. This means that solutions – whether natural or technological – and governance mechanisms will need to be ready for scale-up in the next couple of decades.

But who should bear the responsibility for developing and deploying CDR?

While computer models can tell us how much CDR will be needed under different future scenarios – and how it could be deployed in the most cost-efficient manner – they cannot provide guidance on who should deal with it. So we need to look elsewhere.

The concept of “effort sharing” across the world to reduce emissions has long been a feature of discussions about climate policy. In a new paper for Nature Climate Change, my coauthors and I argue that equity considerations matter when discussing CDR – both internationally as well as intergenerationally.

In our analysis, we show how equity considerations have a strong effect on which countries bear responsibility for CDR, as well as how they also allow us to place a “price tag” on delayed emission reductions in the form of future CDR obligations.

Our research looks at how to assign responsibility for CDR equitably to countries and regions, using model scenarios as a starting point.

We developed two different approaches to sharing out CDR needs – one based on culpability for climate change (following a “polluter pays” principle) and the other based on capability for addressing it.

Our modelling takes into account different pathways of how human society can either stay below 1.5C or overshoot temporarily and bring temperatures back down. This is representative of the emissions scenarios used for the special report on 1.5C by the Intergovernmental Panel on Climate Change (IPCC).

Our method allowed us to explore how responsibility varies with the strength of near-term emission reduction targets – and, thus, the level of peak warming and total amount of CDR required – as well as with the socioeconomic assumptions that underlie each scenario.

In our first approach, countries with more responsibility for causing climate change take a greater share of the burden. We allocated CDR in proportion to the degree to which countries’ cumulative per-capita emissions exceed the global average. Following this scheme brings countries closer together in terms of their per person contribution to climate change.

The figure below shows how these different approaches (centre and right-hand panels) – as well as a “least-cost” option (left) – translate into CDR quotas for individual countries and regions (lower panels). The box plots display the range of model scenarios – including limiting warming to 1.5C with little or no overshoot (black squares), limiting to 1.5C after a large overshoot (grey circle) and missing 1.5C, but limiting warming to 2C (white circles). 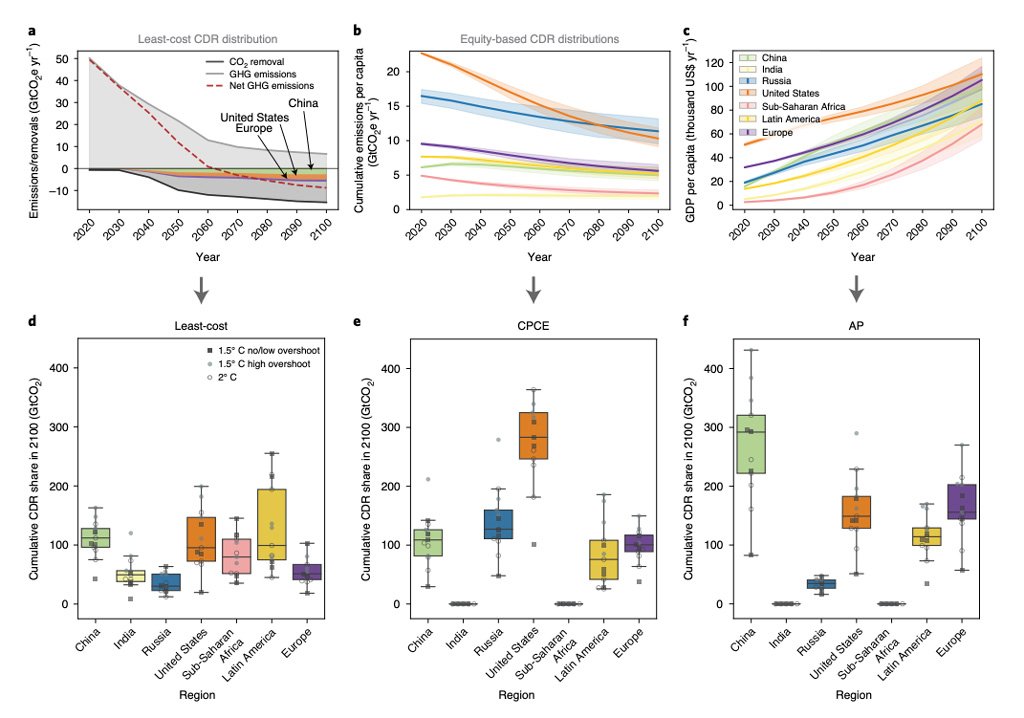 Our results show that the choice of approach makes a considerable difference to the CDR responsibility for each country or region.

In the “least cost” case, CDR is deployed evenly across the world, with India, Latin America and sub-Saharan Africa receiving quotas similar to or larger in size than the EU’s allocation.

Adopting a burden-sharing approach that assigns countries with greater historical emissions greater responsibility for CDR (centre), the US’s responsibility is more than double the other regions’ quotas. Alternatively, if countries with more money shoulder more of the burden (right), China gets the largest share, followed by Europe and the US. China takes much of the burden because, in the scenarios we use, its GDP grows rapidly around mid-century, when CDR needs to be deployed at scale.

For major emitters, responsibility assigned on the basis of equity is two-to-three times larger than their least-cost allocation. Meanwhile, less developed countries that have emitted (and will continue to emit) far less receive very little CDR responsibility, or even none at all.

Our analysis essentially separates out CDR efforts from the ongoing need to reduce emissions. This separation is an important reminder that both are needed. CDR deployment should not undercut emission reduction efforts, but should instead incentivise accelerated efforts in the near term.

When we compare model pathways with different levels of near-term action, it is clear that pathways with earlier and more rapid global emission reductions – driven by deep reductions in energy demand, renewable energy expansion, electrification and behaviour change – have much smaller CDR burdens than those that delay emissions reductions and overshoot 1.5C.

The figure below shows how each country or region’s emission level in 2030 (horizontal axis) affects the cumulative CDR fair share by 2100 (vertical axis). We found that for major emitters, such as China, the US and the EU, each additional billion tonnes of emissions in 2030 generates about 20-70bn tonnes of additional CDR responsibility over this century. This raises questions of fairness towards today’s youth and future generations.

With government climate targets far off track for 1.5C, the amount of CDR that would be needed to pull temperatures back down would likely be impossible without compromising sustainable development objectives.

If major emitters were to double their near-term mitigation ambition and reduce 2030 emission levels by a half – consistent with what is required globally to limit warming to 1.5C – each would reduce their CDR fair shares drastically. For example, by 130-420bn tonnes for China, 160-250bn for the US and 40-120bn tonnes for the EU.

For illustration, the upper end of these ranges corresponds to about 40 years’ worth of current CO2 emissions for China, 50 for the US and 30 for the EU.

At home or outsource?

So, we have looked at different ways to allocate “fair” shares of CDR to different countries and regions, but what potential do they have for sustainable CDR deployment?

A recent Nature Climate Change study – deploying similar ideas to ours – compared their derived CDR quotas with actual deployment potentials in the EU. It found that most European countries could not meet their quotas through domestic action alone.

In such cases, countries could pay for CDR elsewhere through the provision of climate finance or the use of voluntary offsetting schemes. Governments may even opt to include removals in the Paris Agreement market mechanisms, allowing their transfer between countries for use towards climate targets.

However, including CDR in international emissions transfer schemes is not without risk. If the rules and transparency of such markets are insufficient, the transfer of removals could create challenges for tracking progress in achieving both real emission reductions and real removals.

Regardless of the tools used, they will need to be designed to incentivise CDR without allowing cheap offsetting options to compromise emissions reduction efforts. Removals should not be seen as simply emissions in reverse.

One option could be to adopt separate targets for emissions and removals, drawing attention to the need for both, without compromising progress on one over the other.

This would be particularly helpful for understanding net-zero targets, which often lack clarity over how quickly real emissions are reduced, and how much CDR would be involved. Equity-based analyses such as ours could provide a basis for setting and assessing such targets, indicating where moral responsibilities require governments to go beyond net-zero to “net negative” emissions.

While awareness of the need for CDR is growing, we do not yet have the systems in place to accelerate its deployment in a way that is fair, sustainable, easy to monitor and consistent with the urgent need to reduce emissions.

An open discussion of who bears moral responsibility for CDR, and how this responsibility is tied to near-term emission reduction efforts, could help governments and businesses to set more equitable climate targets and strategies.

This entry was originally published on Carbon Brief.

Despite a bumpy 2020, the Carbon Offsetting and Reduction Scheme for International Aviation (CORSIA) is finally poised to take off in 2021. But will it actually reach its destination? Worse yet, given the impetus for a green recovery from the pandemic, is it sending the wrong signal? More importantly, what can Small Island nations do to help CORSIA get back on track?

Consultations in the time of Covid-19: small islands unhindered in stepping up climate ambition

Despite the compounding challenges posed by the coronavirus pandemic, its economic fallout and a slew of tropical storms, small island nations still prioritise fighting the existential threat of climate change. They are pressing on with strengthening their climate commitments under the Paris Agreement, which governments are expected to communicate by the end of 2020.