The Review of the Warsaw International Mechanism for Loss and Damage (WIM), undertaken at COP25, was an opportunity for a stronger commitment for action and support, including new and additional finance, capacity building and technical support. Long intense negotiations and a united position among developing countries of G77 and China, lead to an acceptable outcome.

Loss and Damage has been a topic of discussion at the annual UN climate change conferences (COPs) since a work programme on loss and damage was established nearly a decade ago, with successes such as the 2013 establishment of the Warsaw International Mechanism for Loss and Damage (WIM), the inclusion of loss and damage in the Paris Agreement (Article 8) in 2015 and its integration into the Paris Agreement’s transparency framework and global stocktake (2018). This year’s COP provided substantial room for loss and damage discussions due to the second scheduled review of the WIM. This second review was agreed at COP 22 in 2016 and took place based on the Terms of Reference agreed during the Bonn climate change session in June 2019.

The 2019 review of the WIM: reaching consensus on the outcomes

Overall, the decision text, as agreed at COP 25, reflects many requests made by countries in the G77 & China, which maintained a unified position on loss and damage throughout the Madrid session. However, the road to reaching consensus on a final document was long and far from smooth.

From the outset, there were clear differences in developed and developing countries’ vision of the future of the WIM. For developed countries, minor tweaks to the working of the WIM’s Executive Committee (ExCom) was all that was needed, such as the development of a uniform technical reporting format and improving communication and outreach. In the face of increasing current and expected devastating impacts, developing countries expressed the need to significantly strengthen the ability of the WIM to facilitate work on-the-ground to address these impacts. Demands by developing countries for making this happen included, among others, calls for scaled up financing from developed countries, more visible inclusion of loss and damage in the operating entities of the Financial Mechanism, enhanced capacity-building efforts and expanded institutional arrangements under the WIM to ensure that developing countries would benefit from its work. Moving toward consensus across this broad developed / developing country divide took time and arriving at a decision on the outcome of the review dragged into the second week of the conference.

While countries finally arrived at a decision on the review of the WIM, an additional underlying challenge to arriving at consensus on its outcomes, involved the question of whether the WIM should continue to be governed under both the Convention and the Paris Agreement. This question was discussed in parallel in bilateral consultations convened by the conference President, the intent being to keep discussions on the governance of the WIM separate from the WIM review process itself. Nevertheless, this attempt at separation was only partially successful, and the outcomes of the 2019 review of the WIM were still framed around the issue of which governing body or bodies of the Convention and Paris Agreement had authority over the WIM.

Outcomes of the 2019 review of the WIM Governance issues notwithstanding (see below for further discussion), a decision on the outcomes of the WIM review was adopted at the conference. Our analysis of the outcomes will focus on the following elements around the theme of action and support – the most contentious issue that was thrashed out during the two weeks in Madrid:

The table below illustrates the G77 & China “asks” against the actual outcomes of the review process, along with possible shortcomings of those outcomes. While there was consensus that finance for loss and damage must be scaled up, this was reflected only in broad provisions (that are, de facto, inclusive of developed countries, private sector, NGOs, other stakeholders), but are not specifically directed at the obligation of developed countries to do so. There was also no consensus to include wording around “new and additional” financing for loss and damage , though there was recognition of the “urgency of enhancing the mobilization of action and support”, including finance, technology and capacity-building, for developing countries.

It is important to note that the provisions for linkages to the SCF and the GCF set in the WIM review decision are accompanied by corresponding decisions of the COP and CMA on matters relating to finance, specifically, the SCF and the GCF, which should serve to complement efforts under the WIM to strengthen these linkages. More generally, the overarching COP decision (1/CP.25) has an all-encompassing provision that calls on international entities, including financial institutions, to continue supporting the development and implementation of measures to “avert, minimize and address the adverse impacts of climate change”.

It is worth noting that the decision text on the WIM review includes provisions on a number of other areas of importance to developing countries, e.g. the role of best available science in informing work on loss and damage; the need to enhance work on slow onset events and non-economic losses; and a recognition that reducing greenhouse gas emissions reduces the risk of loss and damage. It was also agreed that the next review of the WIM would be in 2024 and that reviews would take place every five years thereafter. 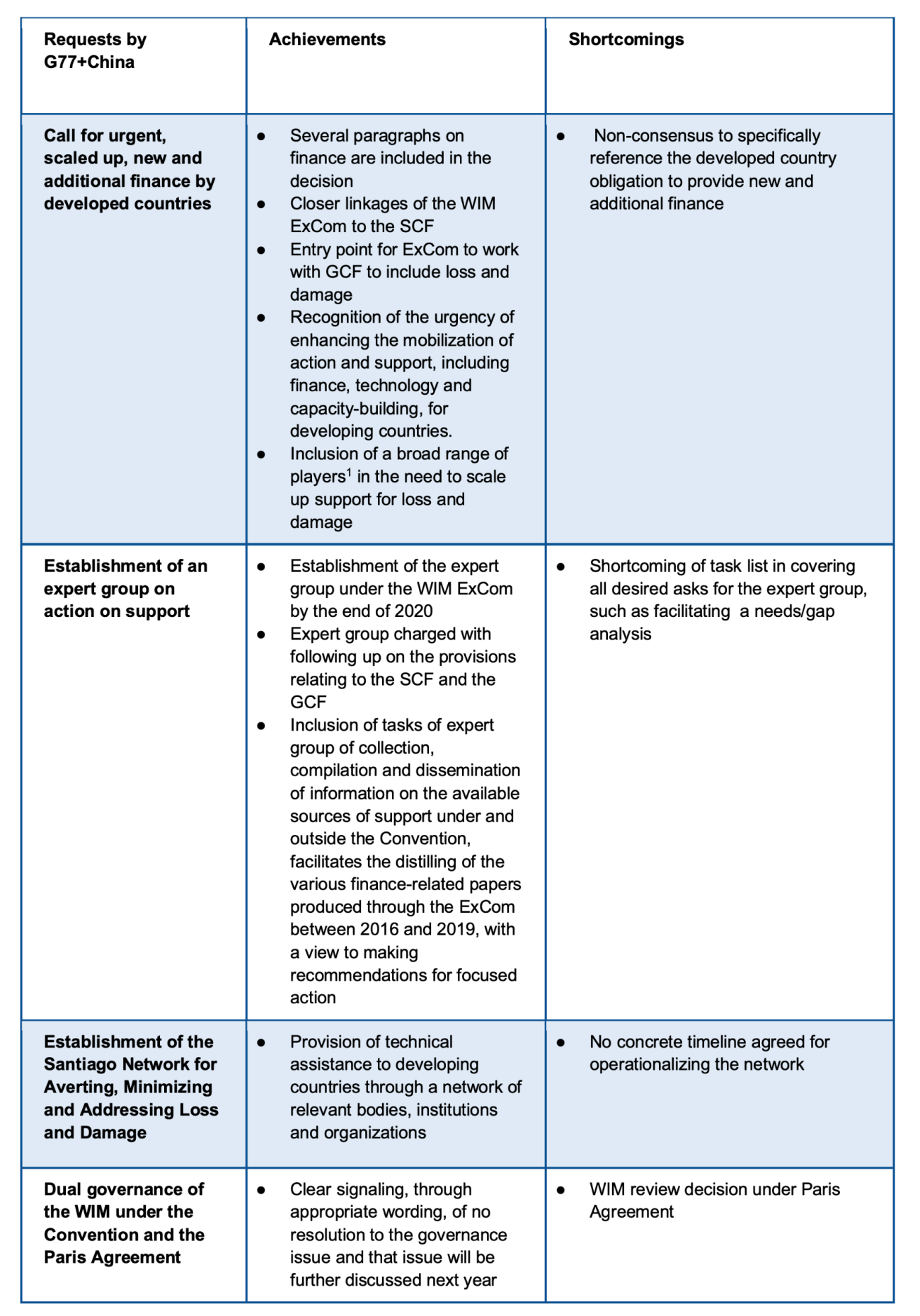 The question of WIM governance

Unfortunately, this fundamental question of governance was not resolved via consultations with the Chilean President at COP 25, which made for a difficult procedural situation, as it was not clear to which governing body or bodies the draft decision on the review of the WIM should go, nor how the matter should be handled or resolved going forward.

In the end, the President proposed a procedural “fix” whereby the outcomes of the WIM review would land under the Paris Agreement with clear operative language stating that this treatment did not prejudge further consideration of the governance of the WIM. A corresponding COP decision would then note the outcomes of the WIM review, again without prejudging further WIM governance discussions and setting COP 26 (November 2020) as the place for their continuation.

While overall the results for loss and damage at COP 25 are a step in the right direction, subsequent COPs will need to include loss and damage in their agendas. While the next WIM review will only take place in 2024, COP 26 (November 2020) is mandated to take up the governance issue, and during 2020, it is expected that the expert group on action and support will be established, the forging of links between the ExCom and the SCF and the GCF will begin, as will the operationalization of the Santiago Network.

1 Including by de facto, developed countries

The climate movement is brimming with strong women who get stuff done. More than 50 such women work at Climate Analytics and this week, in the run up to International Women’s Day on 8 March, we are celebrating the amazing work they do to tackle the climate crisis.

Preparing for the Suva Expert Dialogue – getting Loss and Damage right

By now it is clear that climate change is as much an economic problem as it is an environmental one. Rising temperatures slow economic growth and devastating climate-related impacts leave large negative imprints on economic development of developing countries. Most financial instruments that have been proposed in the context of loss and damage do not solve the problems developing countries face.