School kids around the world are taking to the streets demanding that the older generation step up efforts to tackle climate change, which they see as a major threat to their future. The teenagers of today will still be alive to bear the climate impacts of tomorrow – like sinking coastlines and cities, droughts, floods, crop failures – and will have an ever shrinking range of options to deal with the legacy of inaction on cutting carbon emissions.
ALSO AVAILABLE IN GERMAN

The international dimensions of the climate problem – such as differential regional vulnerabilities and responsibilities – are well researched, but the intergenerational dimension merits far more attention.

Already at the current level of 1°C warming, climate change impacts are becoming increasingly widespread and severe . In its Special Report on Global Warming of 1.5°C published last October, the IPCC underscored the risks posed by climate change at 1.5°C warming, which would rapidly increase if climate change exceeds that level.

At the same time, the report sends a strong message about the urgency of action. If the meagre efforts to reduce emissions, embodied in current policies and pledges, are locked in until 2030, the 1.5°C goal will be out of reach. Despite this, many governments continue to delay action. The proposal by the German Coal Commission for Germany to continue burning coal for electricity until 2038, which is vastly out of step with the 1.5°C goal of the Paris Agreement, is just the latest example. This sends quite a disturbing signal, in particular to the younger generations, about the missing sense of urgency among policy makers.

Current global efforts to reduce emissions put us on track to a world 3°C warmer than pre-industrial levels by the end of the century. Following the best estimate of the future temperature trajectory these efforts imply based on the Climate Action Tracker, we’d be exceeding 1.5°C around 2035 and 2°C around 2054. Based on population and life expectancy data from population.io, we’ve estimated the probabilities of experiencing a >1.5°C, >2°C or 3°C warmer world for a today’s 60-year-old vs. a 16-year-old (summarised in the table below). Let’s take Germany as an example. A 60-year-old German man has on average a good (62%) chance to be around in 2035, our best estimate to breach 1.5°C under the current trajectory. However, they probably won’t ever experience the impacts of a 2°C world, as they are unlikely to still be around in 2054. 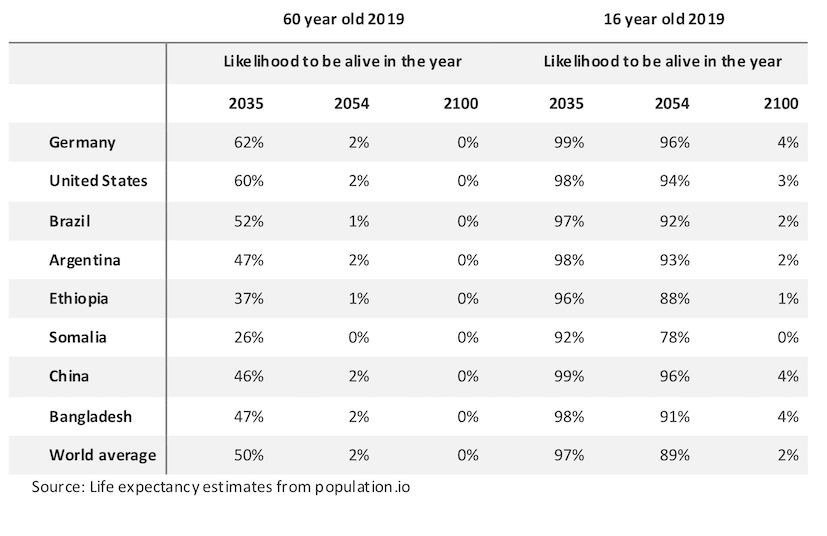 The picture is very different for 16-year-olds. They will almost certainly experience the impacts of a 2°C world, and a small minority of them might even be around in 2100, when the planet would have warmed by 3°C. Under such a trajectory, today’s 16-year-olds may on average live more than half of their lives in a world warmer than 1.5°C and almost half in a world warmer than 2°C above pre-industrial levels. On a demographic side note: These are averages for men. On average, women live longer than men, and will thereby experience more of future climate impacts. In this context, it is rather ironic that a large proportion of climate change deniers are male “cool dudes.”

The inequalities do not end there. The distribution of older vs. younger generations differs strongly between the world regions. One quarter of today’s 60-64-year-olds live in high income countries and the majority in high or upper middle income countries. Only 5% live in low income countries. 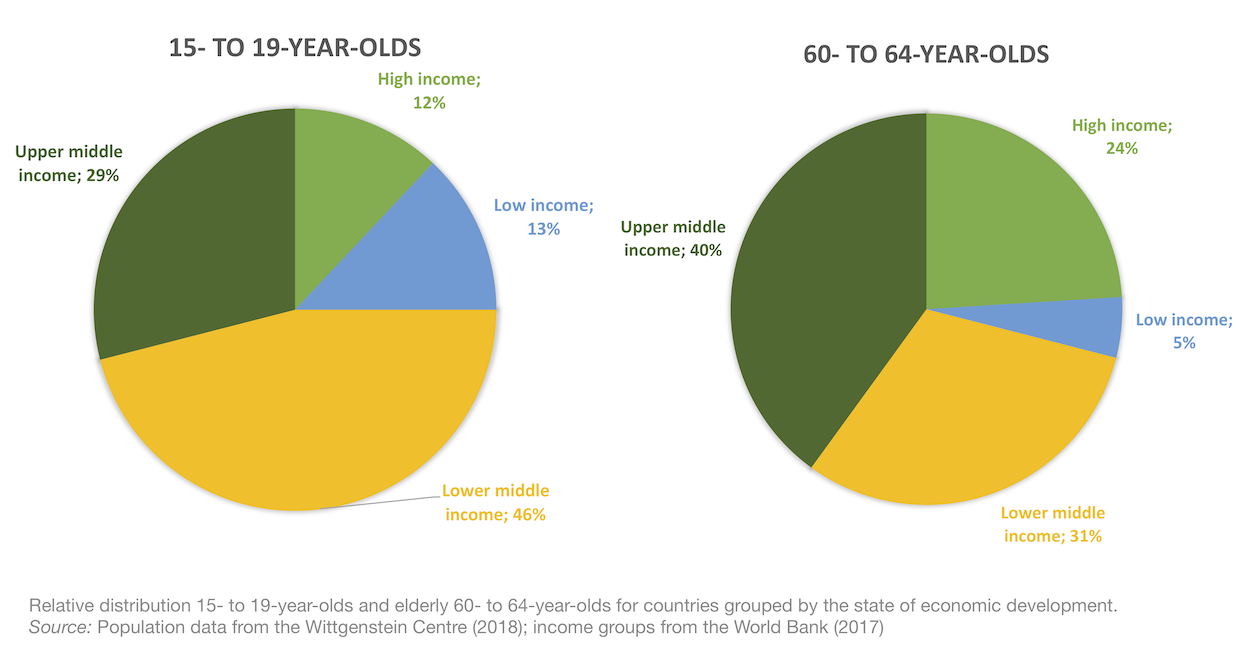 The brunt of the climate change impacts once we exceed 1.5°C warming will fall on low- or lower-middle income countries, which already carry a heavy burden of climate impacts today. Leaving nationalities aside, without rapid climate action, the average global 16-year-old, will not only experience the impacts of a 2°C warmer world; they are more likely to live in regions that will experience the worst of those impacts. This is where international and intergenerational inequalities with respect to the impacts of climate change come together.

Another aspect to look at when assessing the intergenerational dimension of climate change is the distribution of emissions by age. Different dimensions, such as travel or residential electricity consumption, may play a role and even affect future emissions trajectories. This is not a well-studied area, but the outcome of one study is shown in the Figure above. According to their findings for US citizens, per capita emissions of a 60-year-old are about three times higher than of a 16-year-old. While the absolute numbers will depend strongly on the scope and methods used by such an analysis, the overall pattern of increasing emission seems plausible given age dependent income and wealth distributions. Those economic inequalities for younger generations has also received more attention recently.

The IPCC Special Report on 1.5°C (SR1.5) has made it very clear that delaying emissions cuts increases the challenge of achieving the Paris Agreement goals up to the point that they’re out of reach. Delaying emissions will also leave a legacy in the climate system, including for ice sheet melt and sea level rise, for centuries to come. At the same time, present day emission trajectories constrain the options space for future societies to limit climate change. The longer we delay, the greater our reliance on costly and controversial technologies that for example achieve carbon dioxide removal (CDR) will have to be.

CDR is required in all scenarios that limit warming to 1.5°C to make up for residual emissions in the system. However, the scale of deployment differs very substantially between different pathways, and the main factor that limits the need for negative emissions is the pace of near term emission reductions. The lower the 2030 emissions level, the lower the need for CDR.

IPCC SR1.5 used four different archetypal pathways to illustrate the choices we face here. In the most sustainable pathway (P1), CO2 emissions in 2030 are about 60% below 2010 levels and CDR deployment is limited and could be achieved through afforestation and reforestation. On the other extreme is a pathway (P4) that doesn’t have any reduction by 2030 and therefore is likely to exceed 1.5°C, but then uses massive amount of CDR to reverse warming by 2100. This pathway deploys about 1200 GtCO2 of bioenergy with carbon capture and storage (one particular CDR technology) over the course of the 21st century. This corresponds to about 30 years of present day fossil CO2 emissions. The IPCC has identified a range of sustainability and feasibility concerns in relation to such high amounts of CDR.

What does this mean now in terms of the intergenerational question: The 60-year-olds of today may have quite an influence over where the emission levels will be in 2030. The 16-year-olds will then, for the rest of their adult lives, have to deal with the consequences. The consequences of inaction would include the impacts of warming that exceeds 1.5°C continuously or during an extended period of overshoot, as well as potentially the impacts of the deployment of CDR technologies at such scales that negative side effects will be inevitable – a ‘solution’ that also needs to be paid for.

There are multiple questions around the topics of intergenerational justice and climate change. Certainly, the actions (and lack thereof) of the present will define the opportunities that the young living today have to deal with climate challenge. But even beyond those alive today, our choices over the next few decades will shape the world for generations to come through rising seas, soaring temperatures, and changing weather patterns.

Intergenerational justice might have not received the recognition it deserves in the climate discourse so far, but the kids protesting in the streets today are telling us loudly and clearly that this needs to change.

The building blocks for vital climate adaptation in small islands

Improving access to climate finance and increasing absorption of funding opportunities are integral to speeding up Small Island Developing States’ (SIDS) efforts to enhance adaptation and build long-term resilience to climate change. A recent “Writeshop” in Samoa, which brought together Pacific and Caribbean representatives to build on each other's experiences, yielded a number of valuable lessons.

Implementing science-based climate policies requires communication and collaboration between various actors in the interdisciplinary climate field. The ISIpedia project is one of the growing number of efforts addressing this challenge by involving decision makers and practitioners in developing a tool that is meant to benefit them - a user-friendly information portal of climate change impacts.