The body of new research in response to the IPCC’s call for papers for its 1.5°C special report shows that even an additional half a degree of global warming would bring a wealth of negative impacts on most natural and human systems around the world. It would also constitute a severe hurdle to poverty reduction.

On a brighter note, the research strongly suggests that some of the dire consequences of future global warming can be avoided by restricting the global mean temperature rise to 1.5ºC (above pre-industrial levels).

Although it requires drastic societal transformations, the 1.5˚C objective is still geophysically feasible: whether it will be achieved depends on the concerted action of the global community to overcome political obstacles and curtail the future rates of emissions. However, the scientific evidence shows that, without a doubt, the benefits are worth this effort.

In this blog, we give an overview of the most important of the recent 1.5˚C studies on climate impacts and extreme events. Much of it will be synthesised in the IPCC special report, due out in October, which will be a key document for setting the course of climate policy at a global level.

Relief from the heat. The heatwave in India and Pakistan, which killed thousands in 2015, has been attributed to climate change. See this study.

As the Northern Hemisphere summer advances, reports of new heat records around  the world, and especially of the now so-called “Summer 2018 European heatwave” bringing devastating wildfires, death and water shortages, carry a sense of déjà vu reminding us that climate change already affects the living conditions of billions. Early indications are that climate change increased the risk of this year’s heatwave five times.

We already felt this at the end of 2017, a devastating year in terms of extreme weather events after which it became clear that these can already constitute an existential menace for vulnerable populations, threatening their capacity to cope and adapt.

Unfortunately this may well have just been “ a sign of things to come”, as the leading reinsurance firm MunichRe declared, after looking back at the very high losses it recorded from natural disasters last year.

The MunichRe statement is consistent with an ever-growing body of evidence showing that climate change has substantially contributed to an already long list of extreme events. It is a clear call to society to get prepared for the consequences of tomorrow’s climatic changes. Indirectly, it is also a call to science to deliver information on what is the starting point when it comes to adaptation to extreme weather events and impacts: what to expect next?

In recent years, climate scientists have been working on refining the answers to this question. A big part of this effort started after the UNFCCC adopted the Paris Agreement that calls for limiting the global mean temperature increase to well-below 2°C and pursuing efforts to limit the increase to 1.5°C above pre-industrial levels.

At this point, given the prominence of 1.5˚C in the Paris Agreement, and to lift some of the uncertainty around the impacts of climate change for the Paris Agreement’s long term temperature goal, the UNFCCC invited the IPCC to prepare a special report on 1.5˚C.

Given the natural variability that characterises the climate system, distinguishing the consequences of climate change for two relatively close levels of warming is not an easy task, especially when one is interested in regional and sector-specific details. However, concerted effort by climate scientists in response to the IPCC report brought an impressive body of new results.

What past observations tell us about the near future

A Climate Analytics-led study based on the observational records from the 20thcentury shows that in the very recent past (since 1960), half a degree of warming has already resulted in significant increases in the intensity of hot extremes as well as heavy rainfall, providing a good indication to what an additional half a degree warming could result in the future.

Another study demonstrated that anthropogenic global warming has already increased the probability of record-setting heat extremes, heavy precipitation events and droughts over 50 to 90% of North America, Europe and East Asia. As we are now ~0.5°C away from the 1.5°C temperature limit, these results already provide sobering insights into what the world could look like even if we reach it.

But observations have their limitations in predicting the future, as some processes driving climate extreme events may not evolve in an orderly, linear fashion. As an alternative, scientists have used climate models, which have confirmed that the trends observed globally over recent decades will persist for each increment of global mean temperature.

The clearest examples are for severe heat waves, to which almost 37% of the global population will be exposed at least once every five years in a 2ºC warmer world –  three times larger than for a 1.5ºC world (almost 14%).

Heatwaves can also occur in the ocean, where they manifest as prolonged periods of anomalously high sea surface temperatures, causing major threats to marine organisms and coral reefs. A newly released study shows that the number of marine heatwave dayswill be multiplied by 16 at 1.5°Ccompared to now, and by 23 at 2.0°C.

Although there are more geographical variations in the projections for heavy rain than for heatwaves, limiting global mean temperature increase to 1.5 °C compared to a 2 °C scenario could reduce the global risk for this kind of extreme events by one third.

And just as excess precipitation will become an increasingly frequent hazard, so will the lack of it. The projected drought signals indicate that limiting global warming to 1.5°C rather than 2°C would halve the share of the world population that will be exposed to exacerbated or new water scarcity

The developing world will be hardest hit

Science also tells us that some regions and population groups will be hit harder than others. While there will be no real winners in a warming climate, it is clear that the biggest losers will be the poorest and most vulnerable.

Exceeding the 1.5°C global warming limit would lead to the low-income nations experiencing the greatest local climate changes. Among developing countries, the bottom 40% of income earners are projected to suffer 70% higher income losses than the average population.

The tropical regions, where much of the developing countries are located, will be at the forefront of these changes. An additional half a degree increase in global mean temperature would mean that the tropics will undergo strongest increase  in warming relative to natural variability, as shown in a study led by Climate Analytics scientists.

Even at 2ºC warming, the summers there could turn into one continuous heatwave. Two analyses led by Climate Analytics experts show that combining this extreme heat with the robust reduction of the rainy season as well as lower crop yieldat 2ºC makes for an overall gloomy picture for these tropical regions which already host a high incidence of severe poverty.

Overall, Africa and Southeast Asia are expected to suffer the most severe impacts of climate change. Studies focusing on Africa have, for example, found robustly lower increases in both the intensity and frequency of heat extremes, and significantly less intense drought conditions in the northern, western and southern parts of the continent for a 1.5°C compared to a 2°C world.

Southeast Asia, the other hot spot region, is likely to face a higher rise in heavy intensity rainfall events in a 2ºC warmer world relative to 1.5 ºC. A half a degree increase would also mean an increase in extreme maximum temperature in China’s urban agglomerations.

For coastal communities, the risk from extreme events is exacerbated by rising global sea levels, with crucial consequences especially for the small island states. Relative to 1.5ºC, 2ºC would mean 10 cm higher sea levels and a 30% higher rate of increase by 2100.

What might look like a small difference actually means the additional inundation of lands currently home to about five million inhabitants, including 60,000 who live on small islands. At the same time, warmer sea surface temperatures are also projected to bring more energy into tropical storms, leading to an increased frequency of the strongest of them. The perspective of more frequent megastorms acting in combination with sea level rise and heavier precipitation events raises extremely serious concerns about their future impacts on vulnerable coastal populations and infrastructures.

This would cripple even more regions, which often crucially depend for their food supply on coral reef ecosystems since the latter, already severely enfeebled by ocean acidification,may simply virtually disappear if global warming exceeds the 1.5°C limit. 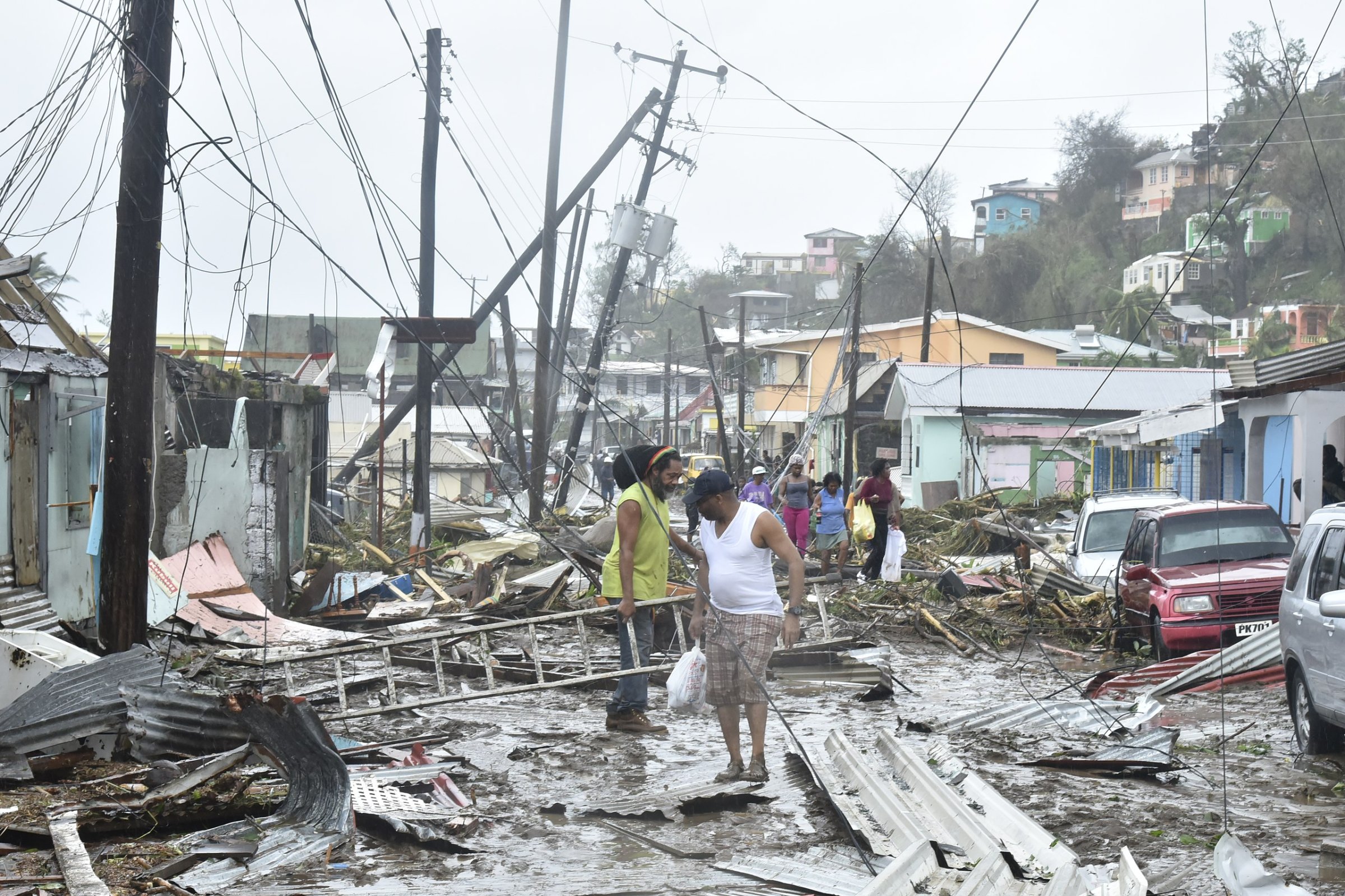 A devastated street of Roseau, Dominica after Hurricane Irma (2017). The odds of such a megastorm are increased by warming sea surface temperatures and will be multiplied at 1.5°C, and even more at 2°C of global warming. Read our briefing on tropical cyclones for more information..

Climate impacts on the developed world

Although low-income countries will bear the brunt of future climate change, this doesn’t mean developed countries will be able to dodge the juggernaut that already represents reaching 2°C above pre-industrial.

In Europe, the events similar to the European record hot summer of 2003, which caused tens of thousands of deaths, would be at least 24% less frequent in a world at 1.5 °C global warming compared to 2 °C global warming.

Shifting from 1.5°C to 2.0°C would lead to an enormous increase in dryness and reduced water availability in the Mediterranean region.

And limiting warming to 1.5 ºC, relative to 2ºC, would perceptibly reduce the frequency of extreme heat events in Australia.

These new findings clearly show that limiting global warming increase to 1.5°C above preindustrial levels would greatly alleviate future impacts on societies across the world. The great scientific efforts that were undertaken to reach these conclusions will be synthesised in the IPCC special report due out this autumn, and should serve as a call to urgent action to reduce greenhouse gas emissions now.

Extreme events under 1.5 vs 2 degree warming: key facts and figures 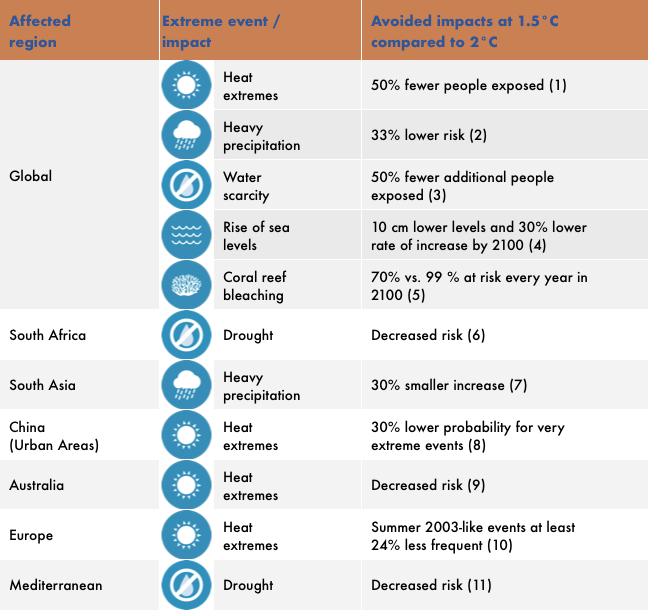 In Bangkok, building on consistent calls at negotiation sessions since Paris in December 2015, many developing countries argued that loss and damage (L&D) should be systematically considered in this context. How did that go?

Small Island Developing States had long been calling for the inclusion of information on loss and damage. Were they heard by the authors of the newly published Special Report on 1.5°C?