Our newest Climate Action Tracker report spells out important, short-term steps over the next ten years that key sectors need to take to help the world achieve the Paris Agreement’s 1.5°C limit.

All key sectors – energy generation, road transport, buildings, industry, forestry and land use, and commercial agriculture – have to begin major efforts to cut emissions by, latest, 2020. By 2025 they should have accelerated these efforts in order to reach a globally aggregated zero carbon dioxide emissions by mid-century. 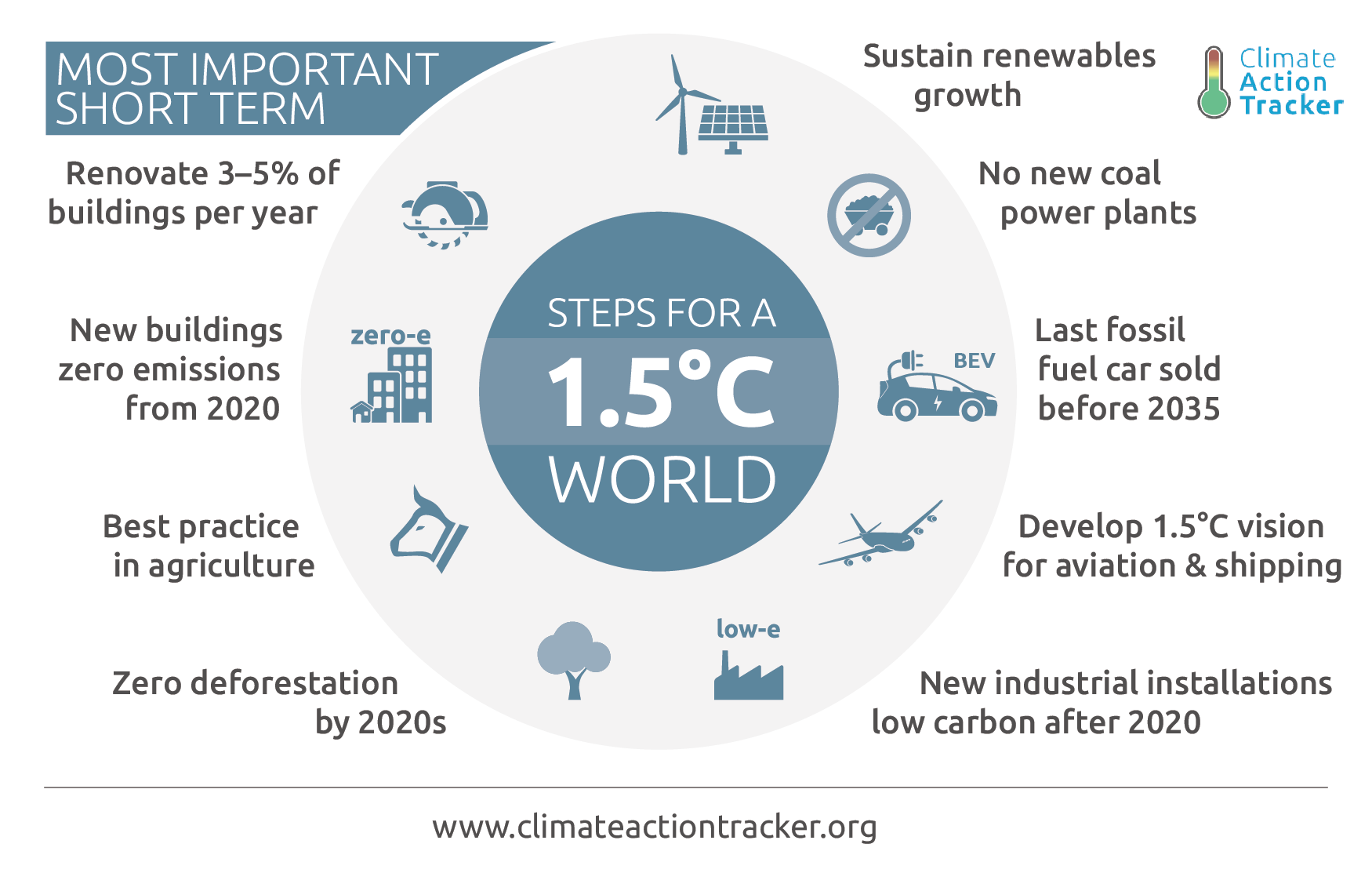 These ten steps are crucial to achieving a complete decarbonisation of our economies over the next 34 years. It may seem like a daunting task but the transition is already underway.

Below are some of the steps the big sectors can take – and some examples of what is already happening.

Renewables are conquering the power sector across the globe: 2015 was a record year for renewable energy with an estimated 147 gigawatts added – the largest ever increase in capacity installed. Wind and solar production has increased by 25-30% year on year, and if this continues until 2025, we will be well on the way toward achieving the zero emissions goal in 2050.

At the same time, the era of king coal seems over, with more and more producers and investors moving away from coal and towards renewables. We find that no single new coal-fired power plant can be built – from today, and those already operating need to reduce their hours and be shut down early.

The transport sector has begun the shift towards electrification. Just a few days ago, Jaguar announced to launch its first electric car and Renault plans a low cost $8,000 electric car for 2018, illustrating the increasing dynamic and expectations of the market towards electric vehicles. China is the leading nation in EV’s, with 330,000 new vehicles sold in 2015 alone. We find that no new fossil fuel powered car can be sold after 2035. Your petrol-fuelled car will become a thing of the past.

One of the best-funded start-ups of the decade has developed a plant burger that smells and tastes and sizzles like meat, showcasing the innovative force within the industry to reduce emissions from livestock rearing that account for 55% of the emissions in the agriculture sector. China recently revised its dietary guidelines, advising individuals to limit their meat consumption to between 40g and 75g a day, half of current consumption levels. This is the type of action we need to see, along with best-practice in farming methods.

If food wastage were a country, it would be the third largest emitting country in the world and it is estimated that up to 14% of emissions from the agriculture sector could be avoided by managing better food use. Many innovative business ideas try to overcome this challenge through the use of big data and governments such as France are leading the way in reducing food waste.

Two other sectors where rapid action would bring significant emissions reductions are buildings and industry.

We find that starting now, all new buildings need to be zero emissions and current building stock must be renovated and retrofitted at an increased rate. We have the technology already but we are not deploying it. If new buildings going up now are not up to this standard, they will need to be retrofitted later on – already one of the most challenging tasks for governments to tackle.

In the Netherlands, social housing corporations have committed to achieve an average energy level B (on a scale from A to G) in their existing housing stock by 2020. Mexico has improved the energy efficiency of millions of buildings by providing a “green mortgage”, targeting both refurbishments of old buildings, and construction of new buildings. If countries with a similar climate were to adopt the Mexican green mortgage programme, it could reduce annual emissions by 129 MtCO2e by 2030.

Emissions from industry need to drop by well over 50% by 2050. To get there, we find that all new industrial installations need to be built according to the best available low carbon technology standard from 2020 onwards. The steelmaking sector, for example, would need to stop building conventional blast furnaces.

China’s Top-10,000 programme improved energy efficiency across industry on average by 3 to 4%. Scaling up the solution could reduce emissions by a significant amount while cutting energy bills for industry and reducing local air pollution.

All this goes to show that the transition towards clean technologies and zero emissions is gaining traction across the board, thereby changing the economic equation and increasingly showcasing that this transition makes economic sense and improves the bottom line across industries. It increases universal energy access, creates approximately double the number of jobs by 2050 than current policies, improves energy independence and reduces risks of fossil fuel impacts.

What is needed in the next few years is consistent and predictable policy support to accelerate these positive developments already underway. Policy makers have the responsibility to set the course into a decarbonised world, to create the environment to enable an acceleration of actions across all these sectors.

We can limit global warming to 1.5°C if we do these things in the next ten years

The latest Climate Action Tracker report looked at major emitting sectors and at what can be done – and how fast – to come up with a list of the most important things to do in the next decade to bend the emissions curve downwards. Bill Hare and Niklas Höhne talk about some of these key steps and the progress to date.