Climate Analytics Inc. in New York together with Heinrich Böll Foundation North America hosted a successful event during ‪Climate Week NYC,‬ which focused on the recent report by the German Economic Institute (DIW) on “Decoupling Economic Growth from Fossil Fuel Consumption and CO2 Emissions” and the results of the INDC analysis work of the Climate Action Tracker.

As part of New York Climate Week 2015, Climate Analytics Inc., the NY branch of Climate Analytics, partnered with the Heinrich Böll Foundation North America and the German Economic Institute for a panel discussion on 23 September. The discussions focused on DIW’s recent report ‘Decoupling Economic Growth from Fossil Fuel Consumption and CO2 Emissions’ and the Climate Action Tracker analysis of Intended Nationally Determined Contributions (INDC) so far submitted to the UNFCCC. The Managing Director of Climate Analytics Inc., Laetitia De Marez highlighted the timeliness and importance of this discussion given the current debate surrounding the framework that governs the Paris Climate Agreement and the need for climate action leading up to this year’s Paris climate conference. 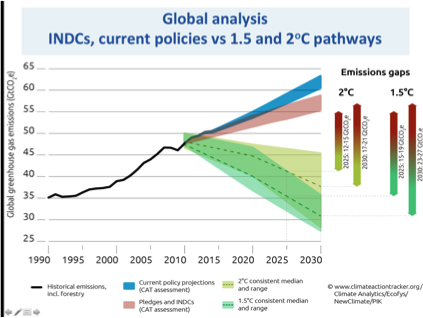 
DIW’s report highlighted the progress made historically by highly visible nations like the US, China, India and Germany as they work to transition to renewable energy use and increased economic growth. However, there is some concern that despite the well noted positive change in the atmosphere of negotiations highlighted by this year’s US-China climate deal, the historic decoupling trend by both countries could move in opposite directions – with China projected to show positive ‘strong decoupling in the future’ while the US slows to ‘weak decoupling’.

The CAT has analysed INDCs representing 65% of 2010 global emissions and found only two ‘Sufficient’, meaning that they are ‘in line’ with holding warming below 2°C. China, US and the EU received a ‘Medium’ rating, while countries like Australia, Canada and Russia received an “Inadequate” rating. Dr. Marcia Rocha, Head of Climate Policy of Climate Analytics, ended her presentation by showing the substantial gap in global emissions that remains between 2025 and 2030, indicating that much more needs to done to achieve the goal of the Paris Agreement to limit warming below 2°C.

The event’s panelist Mr. Selwin Hart, Director of the UN Secretary General’s Climate Support Team, spoke openly about the need for increased climate action stressing that we should not ignore the critical link between the Sustainable Development Goals, poverty eradication and climate change adaptation especially for vulnerable countries, including Small Island Developing States. Even more critically, Mr. Hart warned that governments should not aim to lock in low ambition within the Paris Agreement if indeed warming is to be limited to 2°C. Mr. Hart and his fellow SIDS panelist H.E. Ronny Jumeau, the Seychelles Ambassador-At-Large for Climate Change, both acknowledged the efforts made thus far by developed nations, but also cautioned the audience that ambition and appropriate finance was necessary to close gaps and stimulate implementation needed for mitigation and adaptation. 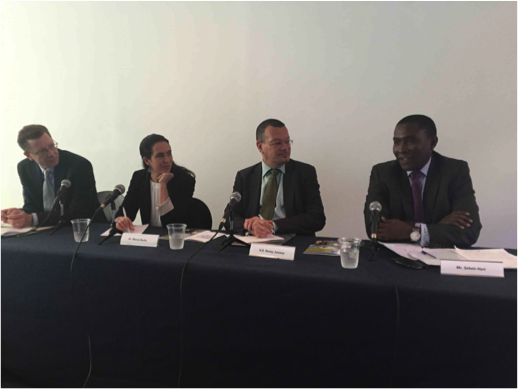 Ambassador Jumeau reminded the audience that they must keep in mind that as Paris quickly approaches the global problem that is climate change requires a global approach to solution making. For the most vulnerable who are already feeling the current impacts of climate change, showing leadership through the voluntary submission of INDC’s is evidence of their solidarity. The members of Climate Analytics Inc. and HBS North America (headed by their Executive Director and the event’s moderator Mr. Bastian Hermisson) noted the key contribution of science and policy analysis toward the global debate on approaches to solving the problem of climate change.

Fossil fuel divestment started as a grass-roots movement and, as it gains momentum, more and more actors - university campuses, cities, pension funds, banks, to name but a few - commit to move away from investing in coal, oil and gas. Divestment campaigns have been increasing the pressure on governments and institutions in the run up to the upcoming climate summit in Paris but will also play an important role once the expected global agreement to halt climate change is in place.

Recently UN experts warned of climate change induced risks to food security. More frequent and intense weather extremes as well as a general rise of mean temperature and sea level will cause this risk to grow. Food security and climate change were high on the agenda at the Tropentag conference, bringing together over 1000 experts to seek solutions to the biggest challenges in tropical and sub-tropical agriculture.