South Korea is one of the world’s top greenhouse gas emitters and currently home to 60 coal power plant units, with seven new coal power units accounting for 7.27 GW under construction. The country is also one of the world’s largest importers of coal, next to China, India, and Japan, with Australia and Indonesia as its biggest exporters.

According to the study, titled “Transitioning towards a coal-free society: Science-based coal pathway for South Korea under the Paris Agreement,” without a change in policy, Korea’s coal power generation would exceeded power sector carbon budgets for coal in line with the Paris Agreement by 2.5 times. If the seven new coal power units currently under construction go online, then the country will exceed this carbon budget by 3.17 times. 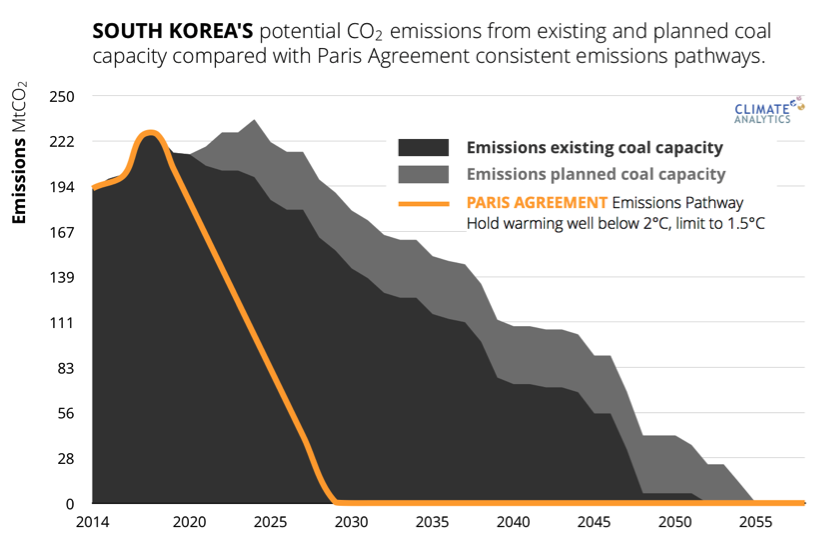 Figure 1 – Coal power plant emissions pathways for South Korea. Emissions from operating coal capacity are calculated based on proposed retirement age (30 years) and historical utilisation rates (81%), and reported emissions intensities per combustion technology and coal type. Paris Agreement compatible pathway for South Korea is a result of the downscaling of the results for the OECD from the IEA ETP B2DS scenario to South Korea with the SIAMESE model.

Despite the encouraging signs that a transition to a coal-free electricity mix may be starting, South Korea has no concrete national commitment, roadmap, or policy instrument to accelerate phasing out coal, and no systematic framework to ease the transition.

The report finds that in order to be in line with the Paris Agreement, South Korea will need to retire its operating power plants much earlier than the currently proposed age of 30 years and/or dramatically reduce their utilisation rate. Every new coal unit that comes online would only increase the already large gap between Korea’s emissions and its Paris Agreement compatible pathway, lock-in emissions for decades and increase the risk of stranded assets.

Paola Yanguas Parra, climate policy analyst and one of the authors of the report, commented: “Public pressure to end coal use and government regulations aimed at tackling air pollution are all positive signs that South Korea is moving towards phasing out coal domestically. What is equally important, however, is rethinking its role in tackling climate change on the international stage. South Korea is still one of the biggest funders of new coal plants in South East Asia but as the world moves away from fossil fuels, it would be much smarter to re-evaluate and focus on renewables.”

Sejong Youn, director at South Korea-based climate policy organisation Solutions for Our Climate, explained that it has now been “scientifically proven that the expansion of coal power generation will have significant economic and environmental burden” on Korea, emphasizing that “we must stop new coal power projects and make concrete plans to replace them with renewable energy within the next 10 years.”