Using the latest science from the Intergovernmental Panel on Climate Change (IPCC), the report – For Climate’s Sake: Coal-free by 2030 – found that in order for governments to fulfill their obligations under the Paris Agreement, OECD countries, including Australia, need to phase out coal in their electricity sector by 2030, (globally by 2040). 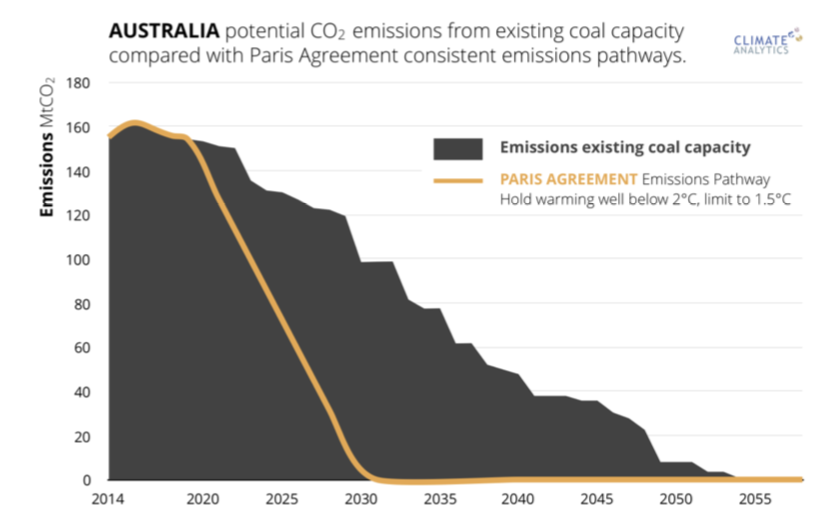 Coal, the most climate-damaging fossil fuel, still supplies about 60 per cent of Australia’s electricity, making its grid one of the most polluting in the world and among developed economies, the report shows.

“Australia would be well advised to fully decarbonise its electricity generation quickly, as it is a fundamental step in cutting emissions in all other sectors, where electrification plays an important role. Delaying coal phase-out will mean that the necessary emission reductions to meet climate targets is going to be even harder and very expensive,” said report author Paola Yanguas Parra, who leads the work on decarbonisation strategies at Climate Analytics.

If Australia’s power plants continue to operate to the end of their technical lifetimes, as current policies foresee, they would emit twice more (194%) than the remaining power sector carbon budget for coal in line with the Paris Agreement.

“Australia has a massive potential for renewable energy and replacing coal with renewables will have large economic and environmental benefits in terms of jobs, lower power costs, and reduced air pollution. Yet international investors are increasingly wary of us as a country, because of our continued reliance on coal – and we stand to lose out, economically,” said Bill Hare, CEO of Climate Analytics.

So far, global warming has already caused events such as major damage to the Great Barrier Reef, and climate projections show that Australia is extremely vulnerable to the effects of global warming.

As temperatures rise, Australia can expect even less winter rainfall, with more drought, more frequent periods with a high wildfire risk, a longer fire season, and people will be more exposed to dangerous heat extremes. And if warming is not limited to 1.5oC we risk the complete loss of the Great Barrier Reef.

“The realisation that climate change poses an existential threat to Australia is certainly hitting home right now, as as communities across New South Wales and Queensland are reeling from the devastation of the recent unprecedented bushfires. Clearly the world needs rapid emissions cuts and Australia must play its part in fighting climate change, and it could start by switching from coal to renewables in its own electricity system,” said Hare.