This mood was perhaps best summarised by Dr. James Fletcher, Saint Lucia’s climate champion, who played a crucial role in the inclusion of the 1.5°C temperature limit in the Paris Agreement. Speaking on the panel of a Climate Analytics event at the start of Climate Week, he reeled off a list of facts that would shake the hearts of even the most hardened climate skeptics:

“Climate change is an existential issue. Before we even reached 1°C of warming, every single one of us in the Caribbean, in the Pacific, in low-lying regions had already suffered from more extreme climate events, hurricanes, droughts, heat waves… When Hurricane Gilbert hit, 350% of Jamaica’s GDP was destroyed within 48 hours. Not a single roof was left. Life does not just go on. And that’s just one example. We are not being esoteric here – we are speaking of life and death.” 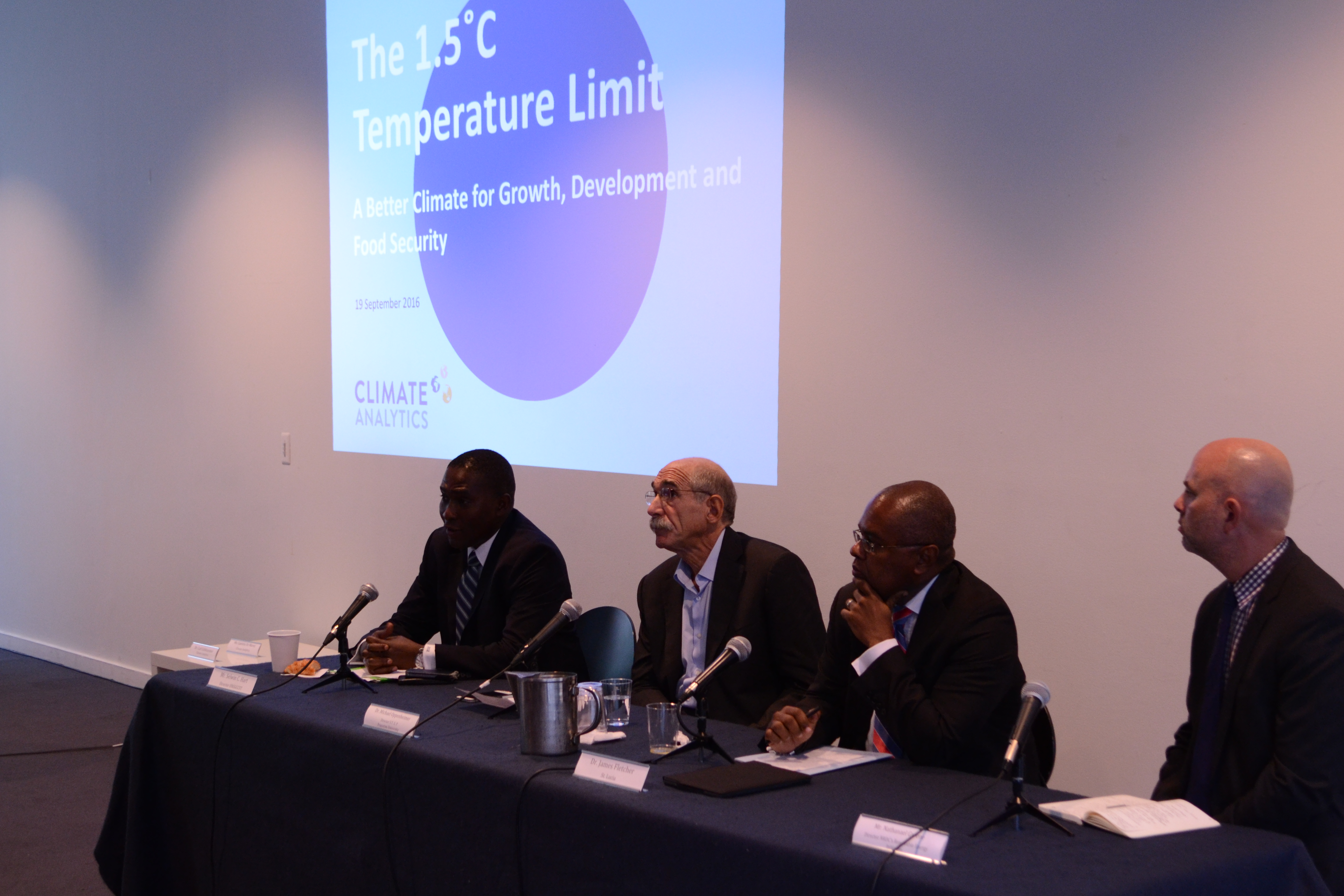 Selwin Hart, the chief climate adviser to Ban Ki Moon, emphasised the need to continue harnessing the momentum behind COP21. During this week, the list of countries ratifying the Paris Agreement reached 60, and the European Union, Canada, and other significant emitters have accelerated their ratification processes in hopes of joining that list by the end of the year (you can follow our ratification tracker here).

This same thinking led 375 prominent American scientists to release an open letter to the “Republican nominee for President” stressing the devastating consequences of a US withdrawal from the Paris Agreement.

A growing body of evidence is showing the feasibility and benefits of limiting warming to 1.5°C. During the panel Dr. Michael Oppenheimer, a leading climate scientist with the IPCC, spoke of the huge fundamental and systemic impacts that would occur beyond that limit and emphasised the urgency of a rapid transformation in key sectors.

Govs need to take a hard look at innovation policies, more attention & $$ for tech change for #ClimateAction, says ClimateOpp</a> at <a href="https://twitter.com/CA_Latest">CA_Latest

Nathanael Greene from the NRDC explained the incredible and transformative advances in clean technology, summarised by the simplest of quotes: “The Stone Age did not end for lack of stones”.

Research presented by Climate Analytics with the Climate Vulnerable Forum (CVF), World Bank, UNDP and other partner organisations shows that 1.5 compatible emissions pathways can also bring about substantial economic, development, and health advantages – advantages that would benefit both developed and developing economies with stronger climate policies. You can download the presentations from the event here:

Inter-organisational coalitions are also mobilising to implement the 1.5°C limit. At a forum hosted by the Climate Action Network, CVF, CARE, and the Stanley Foundation, both state and non-state actors came together to develop action plans for achieving 1.5°C, as well as how to increase ambitions for COP22 and beyond.

The big city networks acting on climate change are increasingly putting 1.5C at the core of their targets and strategies #CWNYC

Another forum hosted by the Stanley foundation brought together journalists covering climate issues with experts and campaigners, including Climate Analytics’ Dr Marcia Rocha, to inform and help contextualise reporting on the 1.5°C temperature limit – why it matters, what efforts are made to achieve it, emerging 1.5°C coalitions, next steps at COP22 and how the special IPCC Report, due in 2018, factors into this.

The myriad of events, showcases, and meetings during Climate Week illustrated the many opportunities for each and every one of us to take immediate and decisive action on climate change – before our window of opportunity irreversibly closes.

A recent research conference in Brussels revealed a range of 1.5°C scenarios derived from a larger variety of climate models. These results are an important milestone in light of the implementation of the Paris Agreement that enters into force on November 4.

The Intergovernmental Panel on Climate Change (IPCC) has just approved the outline of the special report on the 1.5°C temperature limit - here's what it will contain.