Their central projections indicate global sea level rise between 0.7m and 1.2m until 2300 with Paris put fully into practice. As emissions in the second half of this century are already outlined by the Paris goals, the variations in greenhouse-gas emissions before 2050 will be the major leverage for future sea levels. The researchers find that each five year delay in peaking global CO2 emissions will likely increase median sea level rise estimates for 2300 by 20 centimeters.

“Man-made climate change has already pre-programmed a certain amount of sea level rise for the coming centuries, so for some it might seem that our present actions might not make such a big difference – but our study illustrates how wrong this perception is,” explains lead author Matthias Mengel from the Potsdam Institute for Climate Impact Research (PIK). “Every delay in peaking emissions by five years between 2020 and 2035 could mean additional 20 cm of sea level rise in the end – which is the same amount the world’s coasts have experienced since the beginning of the pre-industrial era.” 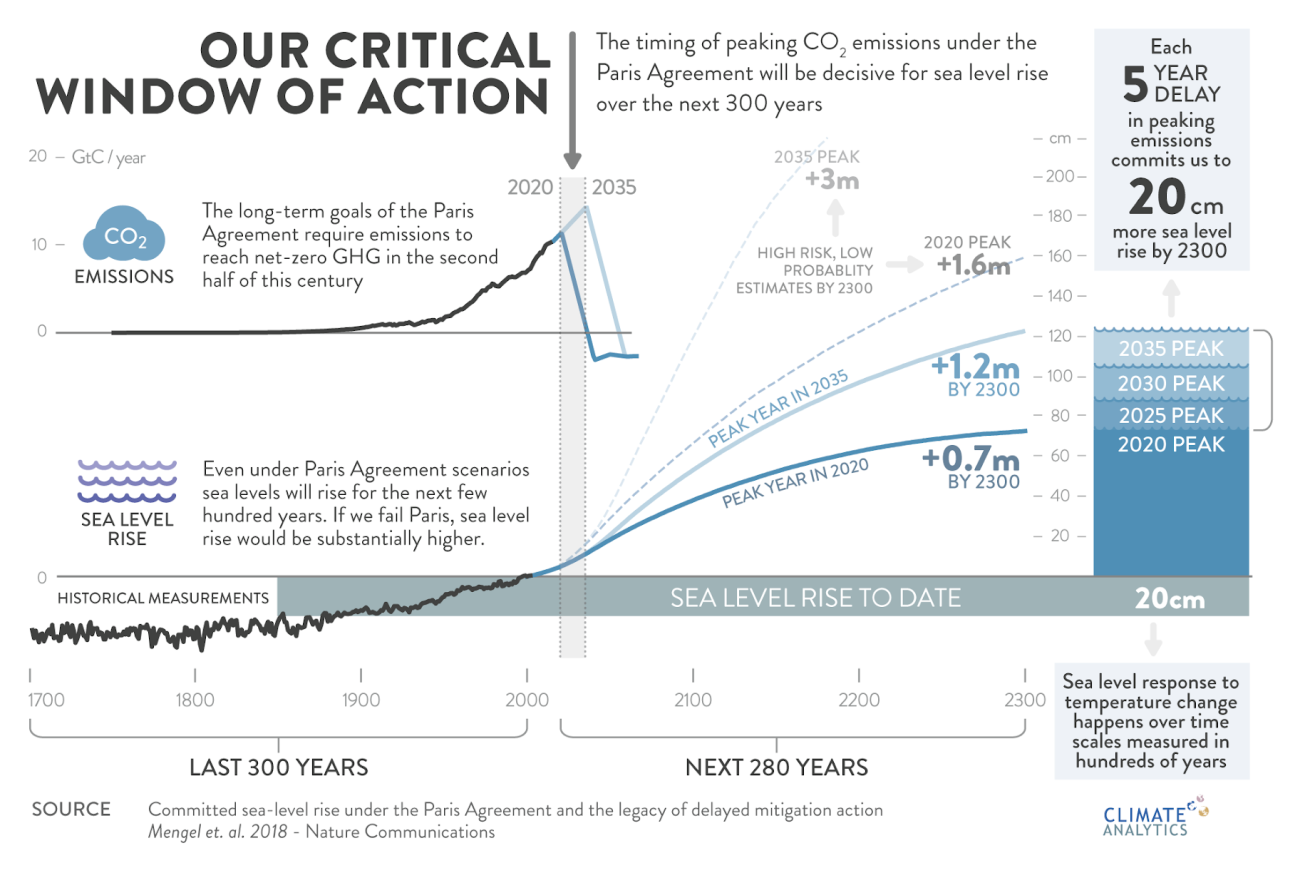 Global sea level rise is driven by warming and expanding ocean water, as well as the melting of mountain glaciers, ice caps, and the vast Greenland and Antarctic ice sheets. These contributors respond in different ways and within different timescales to a warmer climate, ranging from centuries to millennia – a delayed response to today’s atmospheric warming. To analyze the sea level rise under the Paris Agreement and the legacy of delayed mitigation, the scientists used a combined climate-sea-level model. They fed it with a set of scenarios of emission reductions in line with the Paris goals that span different reduction rates and emission peak years.

The model represents the sea-level contributors individually and can thus reflect their different responses to a warming world. The authors incorporate new scientific insights pointing to an Antarctic ice sheet very sensitive to atmospheric warming. “Indeed, the uncertainty of future sea level rise is at present dominated by the response of Antarctica. With present knowledge on ice sheet instability, large ice loss from Antarctica seems possible even under modest warming in line with the Paris agreement”, says Matthias Mengel. “Even a sea level rise of up to three meters until 2300 cannot be ruled out completely, as we are not yet fully certain how the Antarctic ice sheet will respond to global warming.”

“The Paris Agreement calls for emissions to peak as soon as possible,” adds co-author Carl-Friedrich Schleussner from PIK and Climate Analytics, a non-profit research and policy institute in Berlin. “This might sound like a hollow phrase to some, but our results show that there are quantifiable consequences of delaying action. So even within the Paris Agreement range, swift climate mitigation is crucial to limit additional risks. For millions of people around the world living in coastal areas, every centimeter can make a huge difference – to limit sea level rise risks immediate CO2 reduction is key.”