The report also finds that China’s recent commitment to reach carbon neutrality before 2060 would be directly in line with the long-term goal of the Paris Agreement if it covers all greenhouse gases, but this would require much deeper cuts in the short-term, including emissions peaking as soon as 2025. 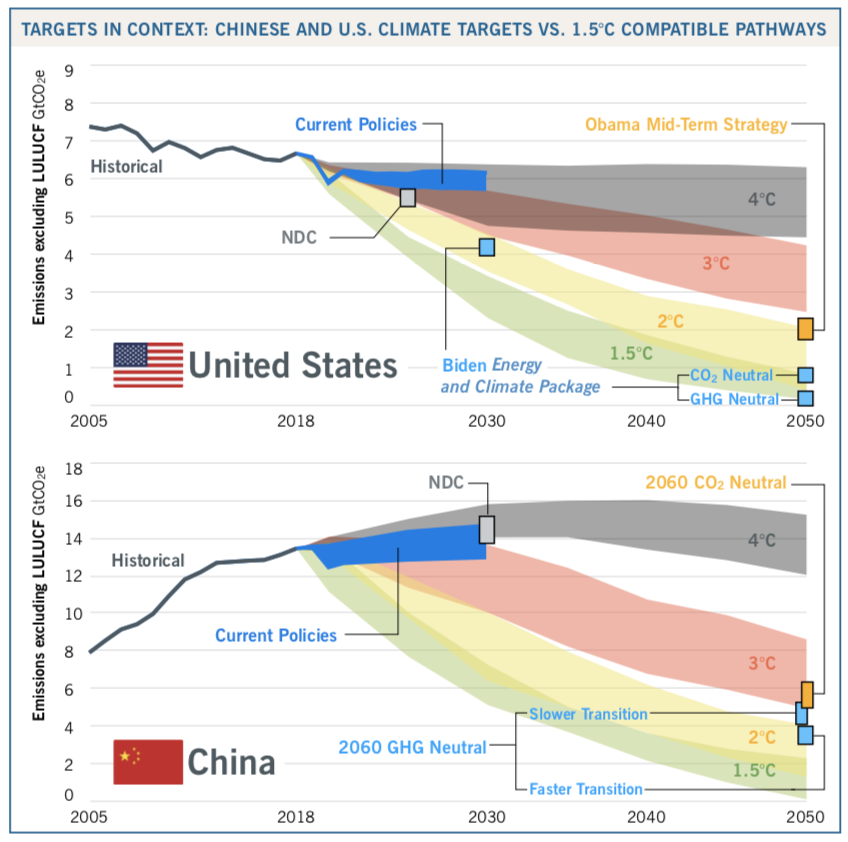 The report is the first attempt to model comprehensively the possible range in ambition of the new 2030 emissions reduction target a Biden administration will list under the Paris Agreement. This includes an assessment of the mitigation potential of various parts of the Clean Energy & Climate Package touted by President-elect Biden during his campaign.

The report finds, for example, that President-elect Biden’s pledge to decarbonize the U.S. energy system by 2035 will represent by far the most significant contribution to his efforts to reduce emissions. And while there is a large degree of uncertainty, the report also finds that around half of President-elect Biden’s plans could be achievable through Executive Authority alone.

President-elect Biden has committed to begin the process of rejoining the Paris Agreement on the first day of his administration and is expected to deposit a new Nationally Determined Contribution (NDC) during the second half of 2021 in the lead-up to the COP26 Climate Conference in Glasgow.

“President-elect Biden’s victory is clearly a massive shot in the arm for the international fight against climate change, notwithstanding some of the limitations he is likely to face from the Senate in implementing his domestic agenda. Nevertheless, an early demonstration of his determination will be the development of an ambitious and far-reaching NDC in the lead-up to COP26, especially one which provides the U.S. a strong arrow in its diplomatic quiver for encouraging other major emitters to also raise their short-term ambition.” said Kevin Rudd, the President of the Asia Society Policy Institute and a former Prime Minister of Australia.

The report also highlights the significance of President Xi Jinping’s recent announcement that China will reach carbon neutrality before 2060, especially if this commitment covers all greenhouse gases. This would directly align China’s long-term emissions pathway with the cuts required to be compatible with the Paris Agreement’s goal of limiting average global temperature increases to 1.5°C.

It would also align China’s long-term ambition with President-elect Biden’s commitment to reach net zero emissions by 2050. However, the report also finds that China will need to deepen its ambition in the short-term, including through peaking emissions emissions as soon as 2025, accelerating progress in the other areas identified under its existing NDC, and halting the construction of all new coal-fired power plants followed by phasing out of all coal power by 2040.

“The pathways to achieve President Xi’s carbon neutrality pledge remain an open debate in China. Ideally, China will move to reach this goal closer to 2050, around the time of the 100th year anniversary of the founding of the People’s Republic of China. But for President’s Xi recent announcement to be seen credibly, China must also do more in the short term. Next month’s anniversary summit for the Paris Agreement provides an opportunity for Beijing to further clarify its position,” said Mr. Rudd.

“The U.S. and China were instrumental in bringing the Paris Agreement to life. Now, with their ambitious new climate goals, these two powerful countries are in a position to bend the emissions curve towards global net-zero greenhouse gas emissions, bringing the Agreement’s objective of limiting global warming to 1.5°C within reach. However, for these targets to be compatible with this objective we need to see urgent short-term action from now to 2030,” added Bill Hare, CEO and Senior Scientist at Climate Analytics.