The Climate Analytics work, which considered Australia’s performance against 10 other prominent nations, such as the United States, China and Germany, found:

Australia has one of the most polluting power grids in the world with 62 per cent of electricity generation coming from burning coal. 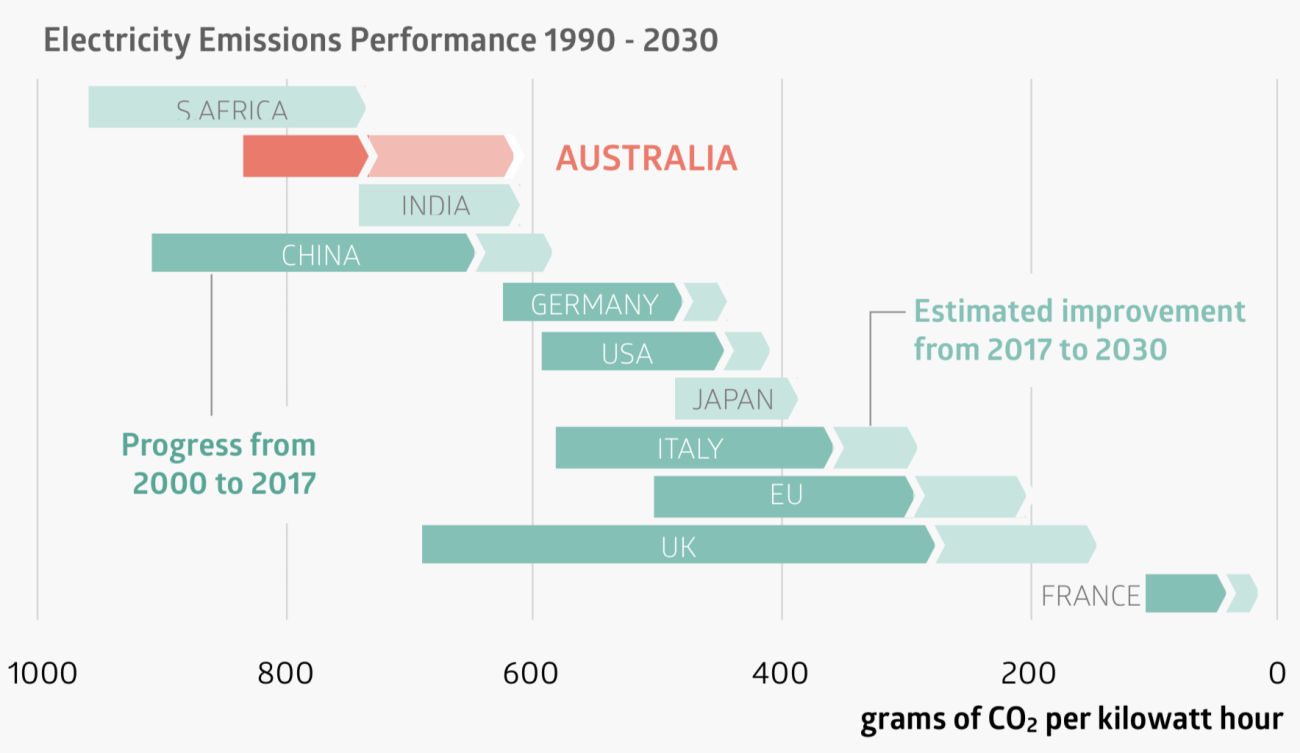 Current policies will only drive a further 9 per cent decrease in emissions from electricity generation to 2030.

Of the countries studied, Australia stands out as having no 2030 or 2050 renewable energy target, no decarbonisation strategy for electricity and no coal phase-out plan.

Climate Analytics shows that for Australia to meet its obligations under the Paris Agreement of helping limit global warming to 1.5 degrees, coal-fired electricity would need to be phased out around 2030 and natural gas use would need to peak in the 2020s and be phased-out towards 2050.

ACF’s Chief Executive Officer, Kelly O’Shanassy, said a wealthy, educated and technologically advanced nation like Australia should be leading the world in transitioning to clean energy, not be stuck at the back of the pack.

“Australia is blessed with enviable sun and wind resources that, coupled with sensible storage solutions, could power our nation many times over,” Ms O’Shanassy said.

“Sadly, two decades of policy wars and ideological climate denial means Australia is lagging well behind in the necessary and inevitable transition to clean energy.

“We cannot keep hitting the snooze button. Countries like France and the UK have coal phase-out dates. Japan and India have renewable energy targets for 2030. China and Germany have decarbonisation plans for electricity. Why doesn’t Australia?

“Ordinary Australian punters get it. They are embracing solar and batteries in their own homes in record numbers. And we’ve also got a pipeline of large-scale solar and wind energy projects that are taking advantage of the Renewable Energy Target (RET), Australia’s only national renewable energy policy.

“But the target is almost met and there’s no national policy to follow it. And the Coalition appears more interested in helping industry mates like Delta Electricity prop up ageing and polluting coal plants.

“The next federal government must urgently accelerate the transition in Australia’s electricity sector to clean technologies that do not produce climate pollution.

“Or the next government risks exacerbating the climate damage – more extreme heatwaves, fires and droughts – that is already harming our communities.”

The Climate Analytics report, Australia’s power supply: Brown and polluting, is one of four analyses on Australia’s performance in cutting climate pollution.

Australia’s pollution profile and how to turn it around