Governments’ current climate pledges set the world on track for 3°C of warming, well above the Paris Agreement’s 1.5°C target, and exposing people around the world to far greater risks of climate impacts – such as floods, heat extremes and dry periods – than a +1.5°C world. The Paris Agreement’s so-called “ratcheting up” mechanism requires governments to produce new ‘Nationally Determined Contributions’ (NDCs) increasing their emissions reductions by 2020.

What level of change do we need to see by this deadline to bring the NDCs in line with the Paris Agreement’s temperature goal?

Here are the key findings of the Climate Analytics report:

Getting NDCs in line with the 1.5°C limit requires a transformational ramping up of ambition for the period to 2030 and beyond. This means collective improvement in ambition that yields a 50% reduc-tion from the 2030 emissions levels implied by current NDCs. This level of ambition would need to be part of long-term strategies to enable sustained emission reductions over the following decades.

All countries need to increase ambition if the 1.5°C temperature goal is to be met. All countries have an important role to play in ramping up ambition, provided that big emitters lead the way.

A 35% reduction from the 2030 emissions levels implied by current NDCs., would bring substantial progress towards closing the global ambition gap but would not meet the Paris Agreement’s long-term temperature goal. Warming would be held just below 2°C (median 1.7°C by 2100). 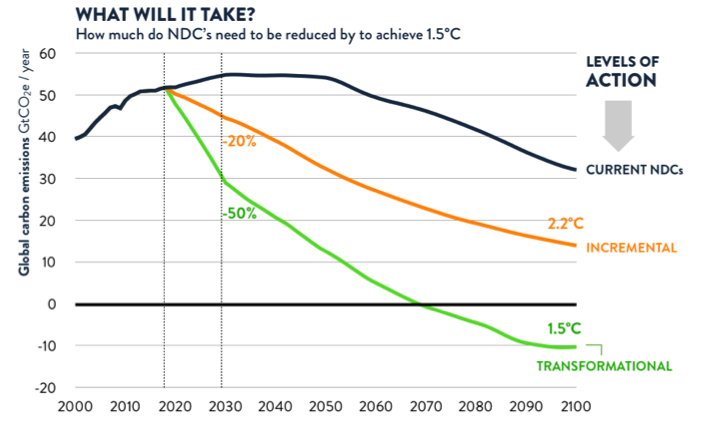 Ignoring the need to significantly ramp up efforts now risks locking in fossil fuel-based infrastruc-ture, thus slowing the pace of transformation and making it more costly, with a large risk of stranded assets.

There are multiple examples from around the world, as well as key market trends, show that a sub-stantial ramping up of ambition is not only possible, but is economically beneficial and is already happening in many sectors and countries.

These include the remarkable cost decrease in renewable energy technologies since 2015, when most of the NDCs were prepared and/or submitted. Countries could achieve much higher emission reductions at the same or even lower cost than what was foreseen for their current NDCs. These cost reductions can be the springboard for transformational ambition in NDCs in 2020.

There are considerable benefits for sustainable development associated with increasing mitigation efforts and ambition consistent with the Paris Agreement. For example, shifting to renewable ener-gy and phasing out fossil fuels can reduce air pollution and its associated health impacts, improve energy access in rural areas, and provide employment.