The carbon budget for Queensland estimated in this report focuses on what the state’s domestic fossil (energy and industry) CO2 emission limits need to be, in order to be compatible with Australia’s national emissions contribution to meeting the Paris Agreement’s 1.5°C limit. To estimate this budget, we make use of state-of-the-art analysis of technically and economically feasible and plausible emissions pathways taking into account sustainability considerations (for example limits to the use of negative emissions technologies) and economic considerations (we aim to minimise costs).

The requirement for deep carbon dioxide reductions and zero emissions means that all emitters – both large and small – will need to take part, as achieving zero CO2 emissions, or even very deep reductions, cannot be achieved without comparable action by all smaller emitters. In this study we have adopted the assumption that for Paris Agreement compatibility, and to be consistent with the Queensland Governments’ zero net greenhouse gas emissions by 2050, that Queensland’s fossil fuel (energy and industry) CO2 emissions will need to reach at least net zero by 2050.

We calculate the carbon budget for Queensland’s fossil fuel (energy and industry) CO2 emissions for the period 2018-2050 to be about 1.2 GtCO2, which is about 0.20% of the remaining global carbon budget until zero emissions. This is consistent with earlier estimates at national level, taking into account that Queensland has a 24% share of Australia’s fossil (energy and industry) CO2 emissions, and Australia has an estimated share of 1.1% of respective global emissions in 2017.

At 2017 energy and industry CO2 emission rates in Queensland of about 101 MtCO2 per year, this budget would be consumed in 12 years, by 2031. Emissions have exhibited a sharply increasing trend in all sectors in recent years between 2014 and 2017, which means that there is greater pressure on policy and action if Queensland is to stay within a 1.5°C Great Barrier Reef compatible budget. 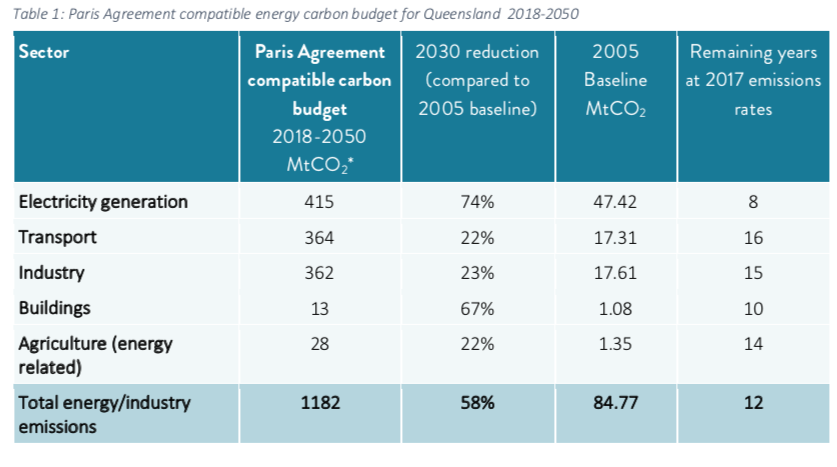 Carbon budget for Queensland for each sector and for all energy/industry emissions as well as necessary reductions by 2030 compared to 2005 to get on to a path that can stay within this budget.

Overall the report finds that a 58% reduction in energy and industry CO2 emissions is needed by 2030 compared to 2005 (55% below 2010 levels), and slightly greater than a 100% reduction by 2050, with some negative CO2 emissions technology deployed in the power sector. The fastest reductions are needed in the power sector, a common feature of all decarbonisation studies. The 55% reduction by 2030 from 2010 levels is faster that the global 2030 reductions required reported by the IPCC of 45%, however this is to be expected as developed countries can be expected to reduce emissions faster than developing countries.

As the Queensland government (2017) has an economy-wide net zero emissions target for 2050, the land use, land-use change and forestry sector will need to be a net emissions sink to compensate for the remaining emissions from other greenhouse gases such as methane and from other sectors such as agriculture in 2050.