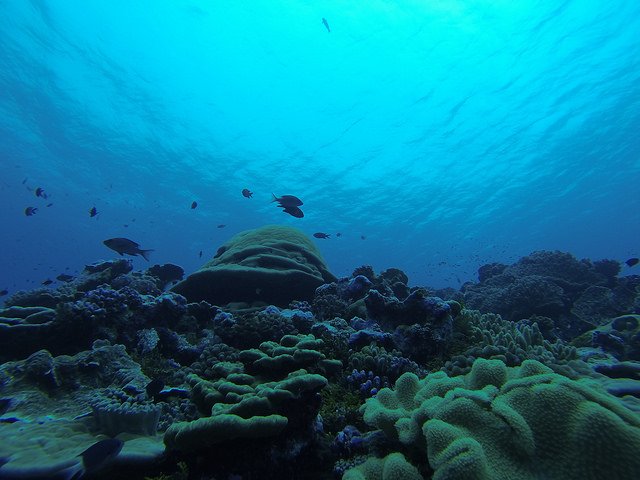 Limiting warming to 1.5°C is of paramount importance to protect the oceans. This briefing provides an overview of the latest science on key risks for ocean systems including from sea- level rise, ocean acidification and impacts on coral reefs and other marine and coastal ecosystems.

Ocean systems are particularly vulnerable to climate change, and there is already clear evidence for loss and damage inflicted by climate change on ocean systems. This briefing provides an overview of the latest science on key risks for ocean systems including from sea- level rise, ocean acidification and impacts on coral reefs and other marine and coastal ecosystems.

The analysis underscores the need to limit warming below 1.5°C to limit impacts on ocean systems. Exceeding that warming level will fundamentally affect ocean systems and undermine any other attempts to protect them.

Limiting warming to 1.5°C is of paramount importance for future ocean pathways. This means that the most urgent step to protect oceans is to reduce CO2 and other greenhouse gas emissions in line with what is needed to meet the Paris Agreement 1.5°C limit.

Sea level rise as a result of anthropogenic climate change is a key impact affecting ocean and coastal systems. Under warming of 2°C, we could be looking at sea-level rise of 5m and more over the coming centuries1,2. Only limiting warming to below 1.5°C will keep sea-level rise under 1m in the long run.

Warming exceeding 1.5°C will greatly increase the probability of reaching critical tipping points for the Greenland and Antarctic ice sheets (1,3). These tipping points are uncertain, but estimated to be below 2°C. Reaching such tipping points could lead to unstoppable multi-meter sea-level rise over centuries and millennia to come.

A rise in sea levels will lead to a steep increase in coastal flooding risks.

Under a warming scenario of 2 ̊C by 2100, we can expect sea level rise of 50cm, and present “one in fifty years” coastal floods will be occurring every year.(4)

Risks are reduced under 1.5°C, but are still very substantial. Drastic increases in coastal flooding risks demonstrate the loss and damage inflicted by climate change even when warming is limited to 1.5°C. 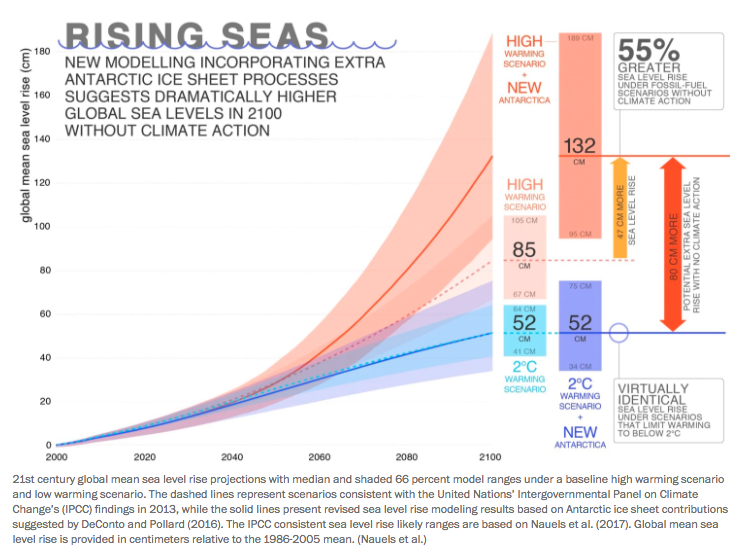 Warming beyond 1.5°C strongly increases the risks of reaching critical tipping points of ocean systems. About two-thirds of critical thresholds in ocean systems identified in climate models may be crossed under a 2°C warming – compared to about one-third under 1.5°C.(5)

Critical thresholds for Arctic sea-ice will be exceeded for warming beyond 1.5°C. A summer ice-free Arctic is projected for warming above 1.5°C (6,7) with very profound impacts on marine and coastal ecosystems as well as on the livelihoods of indigenous communities.

Figure 2: Panel a: Global deoxygenation under IPCC scenarios for high emissions (RCP8.5) about a 4°C global warming and in a hold below 2°C scenario (RCP2.6). Whilse the latter 2°C scenario stabilizes deoxygenation but does not appear to initiate full recovery, a 1.5°C pathway appears likely to lead to initiation of recovery. Panel b: Observed and projected ocean surface pH for different warming scenarios.

Ocean deoxygenation is already occurring as a result of climate change with profound implications for ocean productivity and marine habitat.(10,11) Under warming scenarios exceeding 4°C, ocean oxygen levels in coastal seas could reduce by more than 40%. Limiting warming to below 1.5°C would limit this to less than 10%.(12)

Under a warming pathway implied by policies currently in place, Indo-Pacific maximum catch potential would be almost halved. In the Indo-Pacific, reduction in maximum catch potential doubles between a warming of 1.5°C and 2°C. As a consequence there are large benefits in terms of avoided damages to marine fisheries of meeting the 1.5°C global warming target.(14) Benefits are largest for tropical regions.

Unprecedented marine heatwaves critically affecting coastal and ocean ecosystems are already being observed today, and a steep rise in their intensity and frequency is projected with increasing warming. For example, a heatwave in early 2016 in Australia and the South Pacific led to widespread coral bleaching in the Coral Sea and extensive die-back of mangroves in northern Australia. Under 2°C warming, such heat waves would be the new normal, occurring in 9 out of 10 years.(15)

Tropical coral reefs are already being very substantially affected by coral bleaching and ocean acidification, and most will not survive a warming of 2°C.(16,17) Limiting warming to 1.5°C will leave some chance for ecosystems to adapt, but losses in coral cover, already occurring today, will still be extensive. Present levels of warming are already inflicting loss and Damage to these unique and precious systems and the livelihoods depending on them.

Rising sea levels could be detrimental for mangrove ecosystems in some low-lying regions, for example in the Solomon Islands and Sumatra. Mangroves may be completely submerged before the end of the century in areas where sediment input is not sufficient for mangroves to grow in pace with sea level rise,18 and the important ecosystem services they provide – including coastal protection – will be lost.

Mangroves and sea grasses are vulnerable to a multitude of climate impacts, including ocean warming, ocean acidification, sea level rise and increased storminess,19 and recovery rates of these fragile ecosystems are slow.20 The recent extreme El Niño event as led to a very extensive dieback of mangroves in northern Australia.