Recent COVID-19 vaccine developments offer a glimpse of hope that restoring normalcy might be on the horizon. But returning to normal must not mean returning to business-as-usual as far as climate action goes.

At its peak, the High Ambition Coalition, which played an important role in securing the key elements of the Paris Agreement including the 1.5°C limit, counted more than 100 countries – from vulnerable island nations to major economies including the EU and the US. Now the Marshall Islands, who brought the Coalition to life in the run up to the Paris climate summit, urges those powerful countries who joined them in the push for climate ambition five years ago to also commit to a climate-positive COVID-19 recovery.

In its Statement on Resilient Recovery, the High Ambition Coalition calls for solidarity measures in support of developing countries and encourages a target of 60% of recovery spending to focus on “the green economy and low-carbon professions.” The call echoes the UN Secretary-General’s six climate related principles for COVID recovery. 10 leading members of the HAC, including Grenada, Saint Lucia, Ethiopia, The Netherlands and Luxembourg have signed so far.

Virtually all governments are designing strategies to respond to the impacts of the pandemic. Portions of the packages are meant for rescue: supporting the health sector and helping furloughed or unemployed people and struggling small businesses. But much larger shares of the stimulus funds are aimed at spurring economic activity and growth. Aligning these funds with climate objectives can boost our chances of staying below the temperature limit of 1.5°C stipulated by the Paris Agreement. 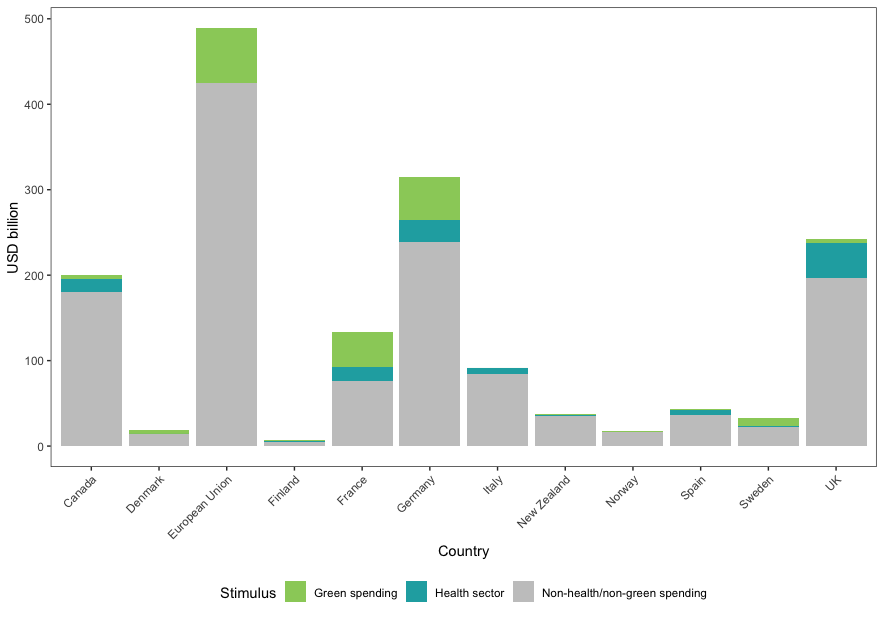 Figure 1: Own calculations based on data from the International Monetary Fund (IMF) and Carbon Brief. The IMF collects data on the general size of stimulus packages and Carbon Brief is tracking the proposed, agreed and implemented green measures by major economies around the world. Green measures are those aiming at reduction of emissions directly or indirectly. Since the tracker accounts for only concrete measures, unspecific future green earmarking is not shown here. The tracker was last updated on October 7, 2020. Stimulus funds shown on the graph do not include liquidity measures such as loans and guarantees.

Major economies must be the frontrunners in building back better, and those who joined the ranks of the HAC in particular should live up to their ‘ambitious’ label. Though the 60% target  is high, it would also bring economy-wide benefits  through building clean energy systems, boosting employment and spurring innovation, for those states that prioritise green spending. And with many governments far from even a 30% allocation, it is critical that major economies go beyond the bare minimum, especially if they want to demonstrate leadership in tackling the climate crisis as well.

The United States has not allocated any green measures to date, despite having the biggest stimulus package in the world, and has received the unflattering rating of having the most damaging stimulus package among the G20 countries. But the measures outlined in President-elect Biden’s Energy and Climate package could change all of this if his incoming administration follows through with a substantial allocation for climate-positive measures in the stimulus to be rolled out next year. This would be an invaluable opportunity for the Biden administration to begin rebuilding the trust of the international community by demonstrating immediate and tangible US re-commitment to climate action while tackling the fallout from the COVID-19 pandemic.

Yet, while major economies discuss 10-digit recovery packages, many developing countries are pleading to multilateral financing institutions for support, demonstrating the inequality in capacity to address the consequences of the COVID-19 crisis. Concerted international efforts that increase the capacity of vulnerable countries will be key to deal with both the aftermath of the pandemic and the climate crisis.

Vulnerable countries could be supported through already existing structures such as the Green Climate Fund or multilateral development banks that will facilitate and de-risk public and private investments in, for example, decarbonising energy systems.  The worsening debt burden of vulnerable countries has also been highlighted in recent months. Small island developing states (SIDS) have called on international financial institutions to work with them on addressing “debt sustainability” by restructuring external debt obligations.

In a year that was meant to be the “the year of climate ambition,” the High Ambition Coalition’s call underscores the importance of aligning COVID-19 recovery with boosting carbon cutting reduction efforts. Stimulus packages will be spent over the next few years, and on their own cannot solve the climate crisis. But they can generate the desperately needed investment and momentum to get on the right track. Right now, most recovery plans are anything but ambitious in terms of what the climate urgently needs.

Our blog for World Children's Day - Massive climate strikes around the world demonstrate that children and youth are increasingly aware that climate change is a looming shadow over their future. So what will their future in a changing climate look like and how are children already affected by climate change?

The scientific literature has clearly established the multiple benefits of stringent mitigation action to achieve the 1.5°C temperature goal and limit the impacts of climate change.